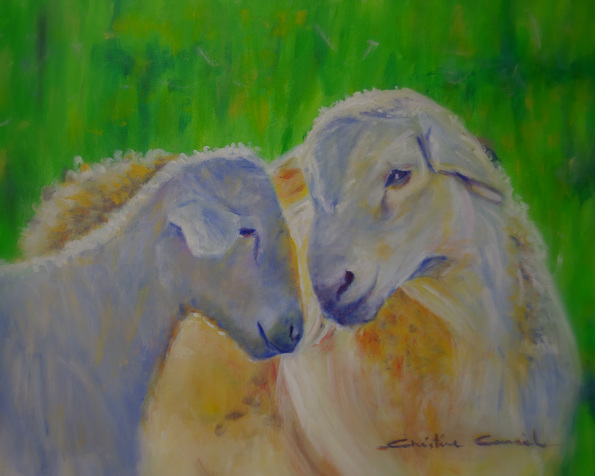 Recently, I had a vision of a woman with a coat of many colors;  like Joseph’s coat.  She was dancing, worshiping, but it was more like warfare, reminded me of  an Indian or something.  She was by a fire and her coat looked like wings when she danced.  I could hear drums; it was dark all around her.  She was being illuminated by the fire...but she wasn’t on fire.

She was mad at the tricks of the enemy, and wanted the morning to come, for the light to shine and overtake the darkness.  Her heart had been hurt and wounded.  She was tired of being alone, always dancing alone, but it was easier because it is so hard to trust from all the years of betrayal.  She fell to the ground, curled up, covered herself with the coat and wept.

She wanted to take the coat off and throw it into the fire.  The coat represented all the gifts God had given her and she didn't want the responsibility of them any longer.  People hated her, like they hated Joseph.  She didn't want to hurt anymore; she wanted to be like everyone else.  So she threw the coat in the fire, and after she did, several people showed up and danced with her.   She looked just like one of them.  She blended right in.

But then, the Lord came in from the left, and He had the coat, He was holding it by the shoulders.  The coat was white on the outside, all shiny now, covered in sparkling jewels.  It looked like something a Bride would wear and seemed to have been refined by the fire.  Jesus looked into her eyes, and then asked her, “Will you wear it for ME, daughter?”

Broken she says “yes”, saying to herself, "how could I say no to HIM?"

Not long after I had this vision, I asked the Lord if I would marry.  He said yes, and then began to describe my husband to me, I was weeping with joy and excitement, but at the same time, thinking, this sounds too good to be true.  Then it hit me, it was HIM.  He was describing Himself.  So I asked Him, “It is You, isn’t it?”  He replied “yes”.   I then asked Him, “Are you saying that means I will not marry a man here on earth?” to which He replied, “yes”.  Then he said I could have a husband, if I wanted one, but that He was asking me to give myself completely to the work He was calling me to.  I know in the Bible, God had Abraham go to sacrifice His son, but he did not have to because God provided the sacrifice.  So I don’t know if this is a test or for a season, or if this is because it will be best, I only know that I am certain He is asking me to crucify it.

I wish I could say I was excited that the Lord was asking me to be set apart for Him…but I wasn’t.  I still am not.  I actually told Him I was disappointed and did not want to talk to Him anymore...so I got up and walked away.  See, since I was a little girl, I have looked for a man to love me.  When I got saved, I found the Man I had been looking for and finally my heart was satisfied.  But still, as a single mom, I always dreamed about the day I would marry, or the man God would bring that could give me more children.  But, it never happened.  There were relationships along the way, but no wedding dress.  Since my son has left home, my “aloneness” seems to be amplified, and I am spending even more time by myself.  The void makes me long for a companion to share the rest of my life with.  It doesn’t help that recently someone came into my life and we had a very short but intense relationship.  I saw a vision and he had a dream, we were both convinced it was God putting us together for marriage.  But, it wasn’t…I think we were both just thirsty and ended up having to let it go completely.

After I had the vision, I painted the bird, “Healing on His Wings”.  A week later someone prophesied that they saw a wing beside me, and there was an angel there blowing on me.  She had not seen the painting so I sent her the link and she wrote back so excited saying the angel had sparkles in his wings, like the bird in my painting.  She also did not know about the vision of the coat.

The night before I painted, the healing minister prayed that God would use my paintings to heal others.  God touched me deeply that night and I cried out in the Spirit for a long time.  One of the very first prophesies I ever got, a seer saw a huge hospital behind me.  He told me that joy comes from doing the will of the Father, so do the work of an evangelist.  I did not know what hospital meant, but over the years I have learned it means that I have a healing gift, and will have a ministry of healing.   Since then, many have prophesied to me that I am a mother, healer and an evangelist.  I can say that have seen many healed through my prayers, but I think it is just the beginning of what God is calling me to and lately people have been telling me God is going to take me all around the world. *

I watched Heidi Baker online this week and I believe God was speaking to me.  He knows how much I love her, so He knew I would be paying attention!  Before she came on, still trying to accept all that God is asking of me, as an act of my will, I took a coat and put it on, dancing before HIM, weeping, telling Him I would wear any coat He wants me to and do whatever He was asking me to.  Then I sat down to watch her.

She spoke about so much that ministered to me.  I wept the whole time.  One thing she shared was about how people will say, when you have great faith, that you are being prideful, but it is not the case.  Made me think of Joseph, I don’t like it when people say that he was prideful when he told his dream.  I don’t think so, I think he was just being who God created him to be and others were just jealous, they hated Him like they hated Jesus.  Her message was out of John 4, The story of the woman at the well.  This woman was always looking for someone to love her, like me, she was so thirsty. She’d had 5 husbands and the Lord told her that this one she was living with now wasn’t even her husband.

She was coming to the well at a time when no one would see her, but when she met Jesus, she dropped the water container and ran into that same city and began to tell everyone about HIM.   She was changed.  She now had a call.  In an instant, she had been set free of her shame, and become an evangelist.  They might judge her and say, "Who does she think she is, we know who she really is…"  But see, her thirst was finally satisfied, and she wanted others to experience this amazing living water.

It wasn't just water either, it was her food too.  See, at the end of the passage, after the woman had run into town, the disciples asked Jesus, do you want something to eat and He said, “My food is to do the will of the Father.”  It is our food to serve HIM.

At the very end, Heidi sat on the stage, turned away from the crowd and lifted her hands.  She had finished her message and was just sitting before the Lord and she said something that seemed odd to me, so random it caught my attention and made me “wonder”.  She prophesied, “Don’t be disappointed….don’t be disappointed with the call.”

Later, when I started to think and meditate on all she had said, I realized, that message was for me, all of it.  The Lord was saying to me.  Chrisie, you have looked to men to try and satisfy your thirst, but IF you just drink from ME, you will not thirst again.  You are hungry, but your food is to do the will of the Father.  If you take this sparkling coat, and choose to be my Bride, wear it for me daughter, I will put living waters inside of you that will heal many and I will use you for my glory.  Don’t be disappointed, trust me.

* not even a week later, I prayed for a woman in Kenya over the phone, and she was healed instantly!

The daughter of a Lamb, is still a Lamb 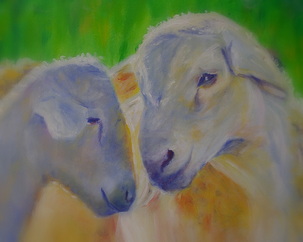 I have often times heard the Chavda’s say, the daughter of a Lion is still a Lion, I had the thought that the daughter of a Lamb is still a Lamb.  So this painting represents my submission to the Lamb that was slain, my willingness to lay down my life for the sake of the call, and for others.  It represents drawing near to Him again and choosing to not be disappointed, knowing that He understands my struggle to die to myself so that others may live.

For if you keep silent at this time, relief and deliverance shall arise for the Jews from elsewhere, but you and your father's house will perish. And who knows but that you have come to the kingdom for such a time as this and for this very occasion? Esther 4:14 Amplified Bible (AMP)

‎"Let us constantly bear in mind the roles and principles of Christian warfare, namely, that we conquer by yielding, we receive by giving, we overcome by being defeated and we live by dying. There is no other way except the way of the cross." George Warnock, in Feast of Tabernacles

Romans 12:1 (NAS)
Dedicated Service
Therefore I urge you, brethren, by the mercies of God, to present your bodies a living and holy sacrifice, acceptable to God, which is your spiritual service of worship.

Psalm 40:4 (MSG)
Blessed are you who give yourselves over to God, turn your backs on the world's "sure thing," ignore what the world worships; The world's a huge stockpile of God-wonders and God-thoughts. Nothing and no one comes close to you!

John 12: 4-26 "Listen carefully: Unless a grain of wheat is buried in the ground, dead to the world, it is never any more than a grain of wheat. But if it is buried, it sprouts and reproduces itself many times over. In the same way, anyone who holds on to life just as it is destroys that life. But if you let it go, reckless in your love, you'll have it forever, real and eternal. "If any of you wants to serve me, then follow me. Then you'll be where I am, ready to serve at a moment's notice. The Father will honor and reward anyone who serves me.
All content is copyrighted and may not be used without written permission from the artist.