Healing in His Wings 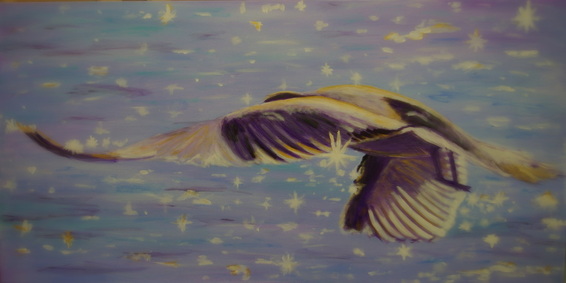 I painted this at an outreach with David Brennan Cordeau in Benson, NC and as I prepared for the meeting, I did not know very much about David, or his ministry.

I was seeking God about what to paint when I came across a 2'x4' blank canvas in my studio I bought a couple of weeks ago, immediately I saw wings painted on it.  I was asking the Lord why He would want me to paint that and then the scripture, Malachi 4:2 came into my heart.

"... for you who fear my name, the Sun of Righteousness will rise with healing in his wings. And you will go free..."

A couple of days later got to meet with David and the ministry team and was so excited to discover that his ministry was a healing ministry.  He is a true apostle that signs follow, and he has seen thousands of healings and creative miracles in his ministry.  As I listened to him, I was amazed and convicted by he (and his wife's) faithfulness to minister for 25 yrs.  I knew God was speaking to me.

Throughout the Old Testament, the Hebrew word for wings in most passages is kanaf when referring to God.

It made me think about places in the word where people touched the "fringe" of the Lord's garment and were healed.

The woman with the issue of blood in Matthew 9:20-22 knew, in her desperation, if she would just touch the edge or fringe of His garment, she would be healed.  How did she know this?

Evidently, this woman had heard Yeshua was the Messiah  and remembered this messianic promise from Malachi and thought, if I am to be healed, then will it be found in His wings...or His tzitziyot, the tassels found on prayer shawls.  So by faith, she reached out and touched the fringes, and was healed, then Jesus said to her, "Your faith has healed you."

In another scripture, Jesus arrived at the town of Genessaret, where many people brought all their sick to Him and begged Him to let them just touch the fringe of His garment. The Bible simply reports, "all who touched Him were healed" (Mk. 6:53-56). These people were not healed simply by touching the fringes of Yeshua's garment in a crowd, but they were healed when their faith touched the power of God and the sun of Righteousness who could heal their infirmities.

These people all received from the Lord because they stood in faith on His Word and authority and came for refuge under the kanaf of the Lord.


Hark the Herald Angels Sing
Hail the heaven born Pince of Peace!
Hail the sun of righteousness!
Light and life to all He brings,
Risen with healing in His wings.
Mild He lays His glory by,
Born that man no more may die,
Born to raise the sons of earth,
Born to give them second birth.
Hark the herald angels sing,
Glory to the newborn king!

This song has been in my heart since I heard it a couple of months ago and it makes me think of the background of my painting...The Diamond Sea by Stephen Roach.

As I was painting, the Lord had me put a shimmering gold in the wings to represent the Glory.  The star under the wing has 8 points that symbolize a new thing or new beginnings.  The sea represents the humanity or world, that is why the bird is flying over it.  The diamonds in the sea represent beauty from ashes, because diamonds come from coal that has been under pressure.  The purple is the color of the authority that Jesus has over sickness that He bought when He died on the cross.   White symbolizes His righteousness and
the blue in the wings represent bringing heaven to earth, because in heaven, there is no sickness or death.
All content is copyrighted and may not be used without written permission from the artist.