​Here’s my first prophetic portrait in a long time. It’s also my first attempt at recording myself painting and narrating it. It’s very small, only 8” x 10”, so there’s not a lot of detail.
For those who have never seen prophetic art in person, I thought it might bless them to see it come together.
I pray this ministers to someone and gives them strength, hope and encouragement…❤️
When the vision began I could see I was very high up above a cliff’s edge. I could see the mountains all around and the valley far below.
My view began to focus on the edge of the cliff, where I could see what looked like a wooden plank coming out from it.
As I got closer, I was now watching a woman very timidly, and carefully
begin to tiptoe out onto the plank, like it was a balancing beam.
Her arms were stretched out, as she was trying to maintain her balance, almost as though she was in a position
of worship or surrender.
She was wearing green, the color of growth and new things.
I was watching her at first from above,
then from her side. I could see how high this cliff was and how precarious stepping out on this plank would be. 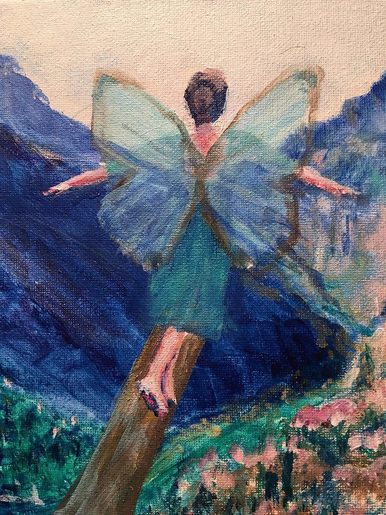 The Lord was saying, sometimes circumstances come and we are forced to step out, and “walk the plank’ by a pirate who has come to kill, steal and destroy.
In those moments, it looks as though death is eminent, as we are stepping off the end of the plank, falling into the deep deep ocean. Wondering...will we sink or swim?
Then I was directly behind her, when I saw, she had the most beautiful sheer white iridescent butterfly wings.
They reminded me of the handmade angel wings you see children wear in Christmas plays.
The butterfly wings she was wearing seemed fragile and unreliable, but they were white symbolizing the purity in her heart, the childlikeness spoke of her trusting faith, the transparency; authenticity, humility...and the iridescence meant, God and heaven’s purpose was in them.
Sometimes we don’t know if our boat will float unless the flood comes, and other times we won’t know if our wings will work until we step off the edge and fly.
Just like the Caterpillar has to risk death, in his chrysalis tomb, to become a butterfly, we have to be willing to fall flat on our face, to see if we can fly.
Even if the circumstances we find ourselves in, are caused by evil forces, like pirates, God is ultimately in control.
He will always use everything for our good.
Sometimes we may fight that moment of walking the plank, but unless we take the risk and make that last step, we will never know if we will fly.
All content is copyrighted and may not be used without written permission from the artist.