The Lamb Who was Slain is the Lion that will Reign 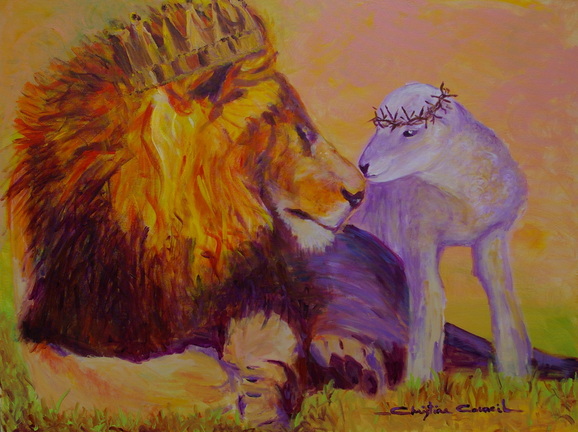 36 x 40 Acrylic on Stretch Canvas
I painted this at a Graham Cooke/Jamie Galloway conference at Grace Church, in High Point NC.  I have not heard either of them in person before and it was so radical, their teaching, so anti religious, so pro-love and about dying to self.  In the words of Graham...it was "Brilliant"!

"The Lamb who was Slain is the Lion that will Reign."  Worthy is the Lamb!!!!

I woke up the next morning after painting and this is what I heard.  I have been asking God for the complete revelation on the painting.  When I was there at the church, I felt led during a break to take a drive.  While I was out, I saw a sign for a church.   It jumped out at me, in a “hey, look at this!” kinda way.  The church was called “True Love”.  It made me think of my painting…for some reason, it seemed to be part of the puzzle or treasure hunt God takes me on when He gives me something.

Recently, I was listening to my mom, and she was telling me how some people like my dad, but don’t like her.  She was also telling me how she tried to exhort these people to change for the better.  My Dad doesn’t do that.  I realized that he is the gentler, more relational of the two of them, he accepts people and loves them where they are.  Now, my mom is an amazing woman of great compassion.  She was a nurse and held babies in her arms as they died, and brought many back to life with her love, but my mom also has strength in her that is much like a Lion.  As I started to ponder it, and think of other couples I knew, there seemed to be a lion and a lamb in each of them.  I mean at sometimes they could be either, but predominantly they were one or the other.

I thought about the Lion and Lamb being one, like a couple, and the relationship between the two.  They are both needed and both beautiful.  Like Solomon in Ecclesiastes says…there is a time and a place for everything.  You know, the whole Bible is about that?  Intimacy, being one with the Father, LOVE manifested on earth…relationship.  That was my heart for painting this, I have seen so many paintings of the Lion and Lamb, but none where they were interacting.

So, I spent a lot of time with the Lord and prepared my reference photos, creating something that expressed what was in my heart.  I prepared it months ago and would ask the Lord periodically, can I paint it this time?  So, as I getting ready for this conference, I asked Him again, "What do you want me to paint?"  And this time He said to me, "What is in your heart?"  <3!

The day before the conference, I had the reference photos printed to take with me, and as I was looking at them, the crowns just appeared on the Lion and Lamb, like they were super imposed there.  Yes LORD!  I remembered a spontaneous prophetic pastel I did at a church where I saw purple, it was like cloth draped, then I saw a gold crown on the top of the page.  I painted it then heard the word, GLORY, so I put it above the crown.  Next I saw the crown of thorns and the Lord had me draw it on the bottom of the page, then I heard, "HUMILITY".  I put that on the very bottom of the page.  It made me weep when I had to get on my knees to put that word in.  When I stood up, I heard the word, INTIMACY...and the Lord told me to put that in the very middle.

We have to remember, in our lives, and in relationships, like Jesus, there was a time for Him  to be the Lamb, and lay down His life for us.  For Him to say, not my will, but your will be done Father.  For Him to be carried away, not opening His mouth, not crying out as He was beaten, and then dying on a cross, bearing all our shame and sin, reconciling us to the Father.  And there is also a time coming soon where He is coming to rule and reign where He will roar fiercely, carrying the authority of the King of Kings!  Where He will be like Aslan in the Narnia series…when He comes and ROARS…oh how I love that part!!!! And when He does, order, change, peace, righteousness and HIS Kingdom will be established!!!!  The Key is to stay in intimate relationship with the Father to know what He desires!  Jesus only ever did what He saw the Father doing.  Hallelujah!
Order reproductions below.  If you want a custom size or order, Send a message here. 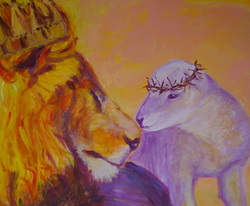 The Scroll and the Lamb

6 Then I saw a Lamb, looking as if it had been slain, standing at the center of the throne, encircled by the four living creatures and the elders. The Lamb had seven horns and seven eyes, which are the seven spirits[a] of God sent out into all the earth. 7 He went and took the scroll from the right hand of him who sat on the throne. 8 And when he had taken it, the four living creatures and the twenty-four elders fell down before the Lamb. Each one had a harp and they were holding golden bowls full of incense, which are the prayers of God’s people. 9 And they sang a new song, saying:

“You are worthy to take the scroll
and to open its seals,
because you were slain,
and with your blood you purchased for God
persons from every tribe and language and people and nation.
10 You have made them to be a kingdom and priests to serve our God,
and they will reign[b] on the earth.”

11 Then I looked and heard the voice of many angels, numbering thousands upon thousands, and ten thousand times ten thousand. They encircled the throne and the living creatures and the elders. 12 In a loud voice they were saying:

“Worthy is the Lamb, who was slain,
to receive power and wealth and wisdom and strength
and honor and glory and praise!”

13 Then I heard every creature in heaven and on earth and under the earth and on the sea, and all that is in them, saying:

“To him who sits on the throne and to the Lamb
be praise and honor and glory and power,
for ever and ever!”

14 The four living creatures said, “Amen,” and the elders fell down and worshiped.
All content is copyrighted and may not be used without written permission from the artist.