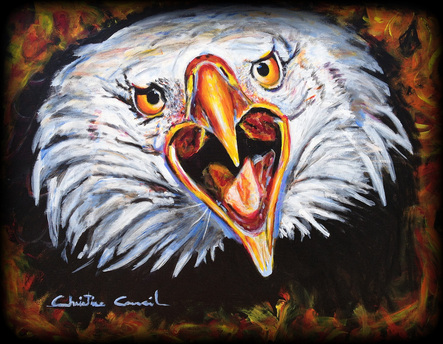 I prepared this eagle to paint at the end of November; I was going to paint it for a Bob Jones conference in New Bern, NC, but I got sick and was not able to go.  So next I was invited to Savannah, GA to paint at Jason Lee Jones' new church, and felt that it would be great there too.  But again, I could not go, I discovered my car was leaking gasoline from the tank, and it had to be replaced.  My mother joked that maybe what I was seeing, the eagle coming out of fire, was a warning that I, the seer might catch on fire!

Finally, I was well, and my car was no longer a threat of becoming a fire ball and I had been invited to come to Augusta, GA for a conference.  I prayed and felt peace that it was time to finally release this painting there.   After I had decided to release it, I got this in my email:

SMALL STRAWS IN A SOFT WIND by Marsha Burns--01/16/12:
Listen for the sound of the eagle's cry, for it is time to take to the sky. I speak to those who move in the prophetic gifting as an eagle rises to the heights. Set yourself for an increased and profound anointing to bring My word to the Church. Position yourself by faith to come to a new spiritual level where you can see with clarity and hear with precision. Then, you will be able prophesy in purity. Come up here, says the Lord.

Revelation 4:1 After these things I looked, and behold, a door standing open in heaven. And the first voice which I heard was like a trumpet speaking with me, saying, "Come up here, and I will show you things which must take place after this."

I’d had the vision some time ago, and decided to paint the whole eagle.  But initially, when I first saw the vision, it was just his face and it was so intense, it startled me.  There was fire reflecting in his eyes, like he was coming up out of the fire.  Later in the vision I saw the whole eagle so that was why I had decided to paint it that way, but still the face of the eagle was so clear in my heart I just wanted to capture the intensity of it too.   So I decided to repaint it. 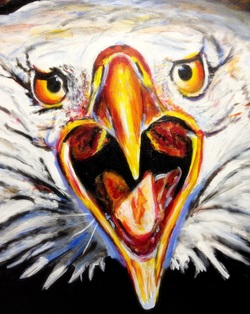 The Lord spoke clearly to me when I asked Him why He wanted to paint this, He said:

"Because it is time for the Eagles to rise up and go forth in power and strength, from the fire of refinement and testing, soaring into revelation...purified by My Love set on course by my Spirit...for Destiny!!!"

You can read the testimony and see the original painting here:   http://www.christinecouncil.com/rise-up.html

When I painted it in Augusta, I was with a ministry from Alaska, I had not thought about it, but there are so many eagles there, it really ministered to the team that had come.   Also, I just remembered, when I first got the vision, I was on top of a huge mountain, like one you would see in Alaska...as I was climbing it, He was teaching me about climbing mountains and how that was like building a church.   And, at this conference, when I painted the leader’s prophetic portrait, I saw a mountain.  That is all I saw, I was worried it was not God...but she said it was right on, that God sends her to the tallest mountains to declare things in the spirit, and God had given her awesome teachings about mountains.

I love the mouth on this eagle, how when it cries, it makes a heart!!!!  That is truly the heart of the prophet and seers.  And the more I paint the visions God gives me, the more I see how HE designed all of a creation with a purpose!  Everything declares His Glory. The beak is golded which speaks of the Glory.  The mouth has pink, the color of passion.  The white head represents the purity.  The blue around the mouth is the spirit of revelation.  The orange represents evangelism and the refiner's fire!!!  Black and white is the color of dividing darkness from the light, which is what the spoken word of the Lord, or the Sword of the Spirit does!!!!

"Listen for the sound of the eagle's cry, for it is time to take to the sky."