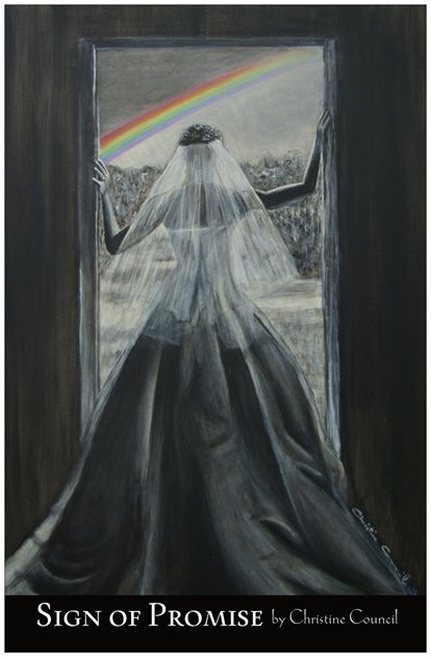 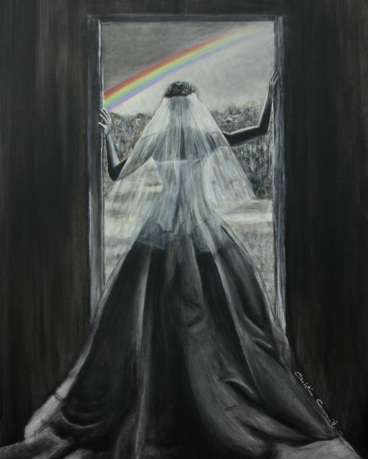 ﻿﻿I painted this in Williamsburg, at Greensprings Chapel and the Heidi and Rolland Baker were there from Iris Ministries.

I had been wanting to paint a Bride for a while and this seemed to be the perfect image of what I felt God was saying, and the right place to release it.   I painted it in black and white to represent intercession and truth.  It did not have the rainbow in it at first.  It wasn't until later that God asked me to put that in.

I believe it was a prophetic word to the church, that God has been saying it is time for the Bride to go out of the “house” to gather the rest of His Bride, like the Bakers have, they gather orphans every day, and have given themselves completely to the work God gave them to do.  It was also a message that we are standing on the threshold of a door, that this is the beginning of something new.  It is about the coming revival that will ultimately lead to the coming of our Bridegroom.

Before I painted it, I kept seeing pairs of animals everywhere.  I was asking God what it meant, and He reminded me of the animals going into the ark.  I was also seeing the numbers 222 and 444, and after I painted it, and did some research, I was surprised to find out that 2 meant, house and 4 door in Judaism; it was confirmation that I was hearing from the Lord and had painted His heart.


I planned to finish the painting, over the weekend of 3/23/12 so I could get prints done in time to take them with me back to Greensprings Chapel in April.  The week before I was going to work on it, I was having a hard time, and one day in particular, I was not happy about being single.  I started to write on my FB wall on the 21st.  "Boaz, where are you?  ~ Ruth"

Not a lot of people know this, but my first name is Ruth and I, like Ruth, am older and single...so sometimes it gets to be hard to deal with.  To top it off, I met an amazing Christian man that day at work, he was so attractive and solid, but, he was also married.  I got in my car after meeting him and I said to the Lord..."I want someone like him.  Why can't I have a husband?"  And began to weep over it.

He is coming very soon... 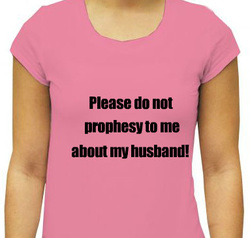 I suppose, I should be encouraged, since I have been so getting  prophecies  about my husband coming “very soon.”  That he will see me, like Boaz saw Ruth, as I am serving the Lord.  So many words, that I joked with a friend, maybe I should get a t-shirt made that says, “Please, do not prophesy to me about my husband!"   See...I have not decided...are they are an encouragement or a distraction?

After I met this wonderful Christian man, I just got very sad, and wanted to pour my heart out on Facebook and post the Boaz status.  To just whine about it, but I decided to be positive instead, and so I wrote, “It feels like a rainbow kind of day...”

It had been raining a little, on and off throughout the afternoon, and I hoped I would see one; I had a feeling I might.   So, after I put the status on, I just started to get upset again.    I was crying out to the Lord, “I am having a hard time, and I really want to see a rainbow!!!  Lord, I neeeeed to see a rainbow!!!”

Ever since I was a little girl, I have seen rainbows.   They seem to come when I need them, and when they do come, God usually speaks to me.

So, I was just driving along, still crying out to God in my heart, when I looked over my left shoulder, because that is where I knew the rainbow would appear, and there it was, I saw the rainbow! 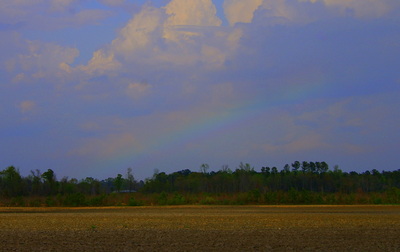 It wasn’t raining at that moment, so it was a surprise, but I had hoped it would be there when I looked.  It was hidden behind the trees, but I could see it, peeking through.  I asked the Lord to let me see it fully, that I would come to a clearing soon,and sure enough, I did.  Then I really started weeping!  I stopped and took photos of it, and once it had faded, I got back in the car.

I was still praising God over how good He was to give me a rainbow, when I saw a sign along the road, it said, “you are one mile from your blessing.”  I thought it was so cool, and sort of ironic considering my day…so…I stopped and took a photo of it.   Then a little bit later, another sign, “Your Blessing is straight ahead.” And then the final one, “Your blessing is here”.   This last sign was pointing to a church, His Bride.

I realized right then, after all the “signs” that I already had a Husband, He is my blessing, AND He is right here.  He is also soooo much better than a man here on this earth!   Sometimes I forget that I am already married, and I am never alone, so I repented to Him.

After that, on the way home, I was just blown away by all that I saw.  It was like God was wooing me and showing me His treasures.  I felt like I was being romanced by my Lover, and I was no longer asking Him where my husband was, because I was seeing Him and His love for me everywhere. So when I went to finish the painting on Friday, 3/23/12, as I was using the black and white paint, working on the folds in the dress, thinking about how the Lord is coming after a Bride without spot and blemish, when the Lord spoke to me, and He said, “I want you to add the rainbow you saw to the painting.  I want her looking at it.”  I was blown away.  All my life I have looked for the rainbows…because He is the rainbow.  He always speaks to me when I see them…  Like a rainbow, He is always there…but it takes the water, the light for him to be revealed.

Promises from the Word 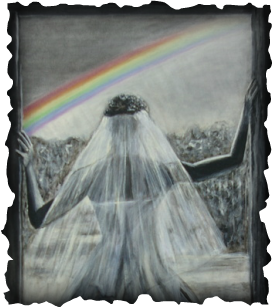 Isaiah 54 (AMP)
Sing, O barren one, you who did not bear; break forth into singing and cry aloud, you who did not travail with child! For the [spiritual] children of the desolate one will be more than the children of the married wife, says the Lord.
Enlarge the place of your tent, and let the curtains of your habitations be stretched out; spare not; lengthen your cords and strengthen your stakes,
For you will spread abroad to the right hand and to the left; and your offspring will possess the nations and make the desolate cities to be inhabited.
Fear not, for you shall not be ashamed; neither be confounded and depressed, for you shall not be put to shame. For you shall forget the shame of your youth, and you shall not [seriously] remember the reproach of your widowhood any more.
For your Maker is your Husband—the Lord of hosts is His name—and the Holy One of Israel is your Redeemer; the God of the whole earth He is called.
For the Lord has called you like a woman forsaken, grieved in spirit, and heartsore—even a wife [wooed and won] in youth, when she is [later] refused and scorned, says your God.
For a brief moment I forsook you, but with great compassion and mercy I will gather you [to Me] again.
In a little burst of wrath I hid My face from you for a moment, but with age-enduring love andkindness I will have compassion and mercy on you, says the Lord, your Redeemer.
For this is like the days of Noah to Me; as I swore that the waters of Noah should no more go over the earth, so have I sworn that I will not be angry with you or rebuke you.  10 For though the mountains should depart and the hills be shaken or removed, yet My love andkindness shall not depart from you, nor shall My covenant of peace and completeness be removed, says the Lord, Who has compassion on you.
11 O you afflicted [city], storm-tossed and not comforted, behold, I will set your stones in fair colors [in antimony to enhance their brilliance] and lay your foundations with sapphires.
And I will make your windows and pinnacles of [sparkling] agates or rubies, and your gates of [shining] carbuncles, and all your walls [of your enclosures] of precious stones.(B)
And all your [spiritual] children shall be disciples [taught by the Lord and obedient to His will], and great shall be the peace and undisturbed composure of your children.(C)
You shall establish yourself in righteousness (rightness, in conformity with God’s will and order): you shall be far from even the thought of oppression or destruction, for you shall not fear, and from terror, for it shall not come near you.
Behold, they may gather together and stir up strife, but it is not from Me. Whoever stirs up strife against you shall fall and surrender to you.
Behold, I have created the smith who blows on the fire of coals and who produces a weapon for its purpose; and I have created the devastator to destroy.
But no weapon that is formed against you shall prosper, and every tongue that shall rise against you in judgment you shall show to be in the wrong. This [peace, righteousness, security, triumph over opposition] is the heritage of the servants of the Lord [those in whom the ideal Servant of the Lord is reproduced]; this is the righteousness or the vindication which they obtain from Me [this is that which I impart to them as their justification], says the Lord.


Ezekiel 1:25-28
And then, as they stood with folded wings, there was a voice from above the dome over their heads. Above the dome there was something that looked like a throne, sky-blue like a sapphire, with a humanlike figure towering above the throne. From what I could see, from the waist up he looked like burnished bronze and from the waist down like a blazing fire. Brightness everywhere! The way a rainbow springs out of the sky on a rainy day—that's what it was like. It turned out to be the Glory of God! When I saw all this, I fell to my knees, my face to the ground. Then I heard a voice.

Isaiah 62:3-5
You will be a glorious crown,
a royal headband,
for the LORD your God.
Your name will no longer be
"Deserted and Childless,"
but "Happily Married."
You will please the LORD;
your country
will be his bride.
Your people will take the land, just as a young man
takes a bride.
The LORD will be pleased
because of you,
just as a husband is pleased
with his bride.

Revelation 22:17
The Spirit and the bride say, "Come!" Let everyone who hears this say, "Come!"

Saw this full rainbow on 4/4/12!  Since I have been seeing so many 4's, I thought it was relevant and wanted to share it!  Interestingly, I was having another day of crying over being single.
The rainbow started out just like the other one I had seen, a fragment on the left.  In time the one on the right side appeared and then they both grew until they connected and became full.  The right side also became double at one point, and was the brightest of the two sides.
All content is copyrighted and may not be used without written permission from the artist.