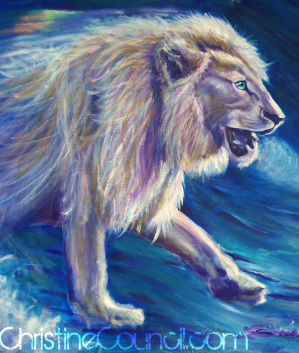 God put this image together in January, but I was waiting for a church to paint it in, since I knew it would be a big canvas, and felt it was a corporate word.

I had been wanting to paint a white lion for a long time.  I love their blue eyes, reminds me of the day I saw the earth reflected in His eye, and painted Longing.  One day as I was seeking the Lord about it, I had the thought to paint the white Lion coming as a huge wave, then, that same day, someone tagged me in a photo on Facebook with a rainbow over a wave.  I knew God was confirming I was to paint this.

This is what I believe it means.  The Lord is coming back, and He will come like a tidal wave.  No one will be able to contain HIM.  He is the promise, so I painted a rainbow above Him like the one that was in the photo I was tagged in, because even though He will come like a tidal wave, He has promised to never destroy the earth with water again.  The water is for washing, it represents the Word of God.   Jesus was the Word, and IS the Word...and His Word will always stand.

He is walking on water because He has authority over all nations.  He is coming out of the waters because, the He emerged from among humanity to deliver the words and works of God.  He is roaring a mist because I believe that represents the Holy Spirit, or Ruach being released over the earth.   It says in the Word that in the end times He will pour out His spirit...on all flesh...and I believe it will come as a wave.

This week, I really started wanting to paint it again, and I remembered I had an old canvas sitting around that I had painted in a worship meeting.  It was a painting of a cup being filled with water to overflowing.  The place where I painted it, the worship leader kept saying that we should be so  filled with God that we spill Him over, that we overflow with HIM.  I knew I had painted the right image for the meeting, but, I just did not like it...and I wanted to redeem it.  So...I had the thought to use it for the Lion.  Since I was painting Him on water, it seemed to fit, especially since the new painting was to represent Him being poured out! 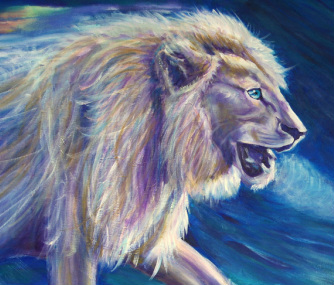 “There will be signs in the sun, moon, and stars. On the earth, there will be dismay among nations in their confusion over the roaring of the sea and surging waves.  The planets and other heavenly bodies will be shaken, causing people to faint from fear and foreboding of what is coming upon the world.  Then they will see the Human One[a] coming on a cloud with power and great splendor.   Now when these things begin to happen, stand up straight and raise your heads, because your redemption is near.”

Jesus told them a parable: “Look at the fig tree and all the trees.  When they sprout leaves, you can see for yourselves and know that summer is near.  In the same way, when you see these things happening, you know that God’s kingdom is near.  I assure you that this generation won’t pass away until everything has happened.  Heaven and earth will pass away, but my words will certainly not pass away.
Luke 21:25-37 (CEB)


“I will pour out my Spirit
on every kind of people:
Your sons will prophesy,
also your daughters.
Your old men will dream,
your young men will see visions.
I’ll even pour out my Spirit on the servants,
men and women both.
I’ll set wonders in the sky above
and signs on the earth below:
Blood and fire and billowing smoke,
the sun turning black and the moon blood-red,
Before the Judgment Day of God,
the Day tremendous and awesome.
Whoever calls, ‘Help, God!’
gets help.
On Mount Zion and in Jerusalem
there will be a great rescue—just as God said.
Included in the survivors
are those that God calls.”
Joel 2:28-32  (MSG)


Ocean saw you in action, God, saw you and trembled with fear; Deep Ocean was scared to death. Clouds belched buckets of rain, Sky exploded with thunder, your arrows flashing this way and that. From Whirlwind came your thundering voice, Lightning exposed the world, Earth reeled and rocked. You strode right through Ocean, walked straight through roaring Ocean, but nobody saw you come or go.
Psalm 77:16-19 (MSG)
All content is copyrighted and may not be used without written permission from the artist.