I got up very early Valentine's Day morning to paint, and before long I was finished...at least I think I am finished.

I recently listened to Heidi Baker speak, through a stream from the Catch the Fire 20th anniversary. She gave a very interesting word, and then got a prophetic song. She was saying that she saw people as chickens and they were making all this noise and running around. She heard some of them crowing like a rooster.  Then she saw them without a head. I really identified with what she said. She said people are distracted by so many things, they are not spending time with God like they should. As she was saying these things I was having to fight the urge to hop on Facebook or to pick up my phone. Yes she was speaking to me and I was truly convicted.

When God first called me to paint, several people would say to me, "Jesus wants to paint with you." I had no idea what that meant, so I would ask people what they thought. Then, finally I cleaned up a corner of my computer room, bought some paints, set up an easel and went and stood in front of it. I raised my hands and began to worship. Then He was there, I could see Him with my eyes open. He was right beside me.

This was unlike any other time before, because I could see him with my eyes wide open. We started painting together and the first thing he said was "cover your hands with the blue and purple then cover the canvas with it." And so it began. We spent four hours together that day. In the middle of the painting I started working on the clouds, and I was having a very hard time, because I couldn't get it just right and I remember being really close to the canvas, I also remembered losing my peace, because I was so into what I was doing, and trying to do it perfectly. Finally I stopped and realized I wasn't feeling Jesus with me anymore. I looked over to my right where He had been standing and He was gone. My heart sank. "Oh no, what have I done?"

Then for some reason I looked behind me and there He was sitting at my desk acting like He was bored. I said, "Will you please help me?" He playfully smiled and said something like "I thought you'd never ask."

As Heidi prophesied, I truly saw myself. I had been feeling like a headless chicken. I had been weary. I had been distracted. I had lost my joy. I had been so into what I'd been doing, I had forgot how to run to Him. Instead I was running around and cockle dockle doing everything but The ONE thing that was necessary...the better thing of being with Him. 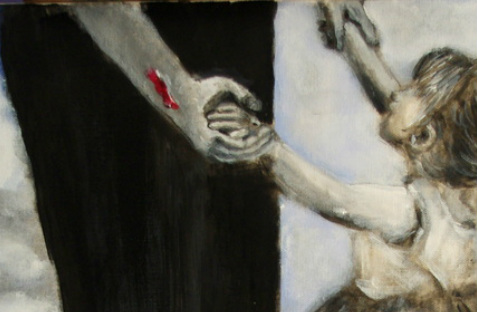 Then she shared more and began to sing, "Put your hand in his hand and step right on His feet." I closed my eyes and I saw it, I saw him take my hands and then I saw myself step onto his feet and we began to dance. when he lifted his foot my foot would lift. I saw his knees go up and my knees go up. It was a playful happy dance between a little girl and her father. There was no effort required on my part except just to keep myself on his feet and look into his beautiful eyes. My joy was restored, and I realized how I had been ignoring Him and how it had made me weary. And then I just wept and wept in repentance for all the distractions and my selfishness. Being prideful and thinking I didn't need Him. Being so into doing things for him that I forgot to be intimate with him. I was being a Martha and not like Mary. It was a time of deep repentance........

After I danced with Jesus, we then started to fly and I was laying on top of his back. My arms were outstretched on top of his... We were mounting up like the wings of an eagle. And Heidi read that scripture... Those who wait upon the Lord will mount up with wings as an eagle... They will run and not grow weary...yes! 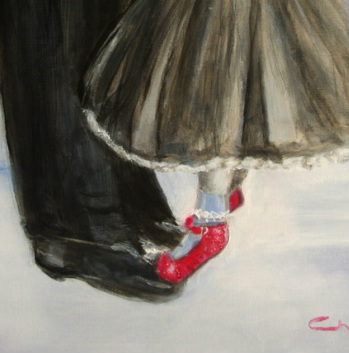 As I was putting the painting together I wanted to just have a blue sky, for the revelation, and the rest in black and white to represent prayer, then I had the thought that she should be wearing ruby slippers, but I kind of pushed the idea to the side and shrugged my shoulders, I wasn't sure why I had that random thought.

Later, I showed my reference image to a friend and for some reason I asked her if there was anything she would change and she suggested the scar in his hand, so people will know she was with Jesus. And it hit me "yes!!" I could see it, the red wound and the ruby slippers together.

The ruby slippers are a reminder, that there's no place like home. We're to stand in our peace, the peace Jesus gave us when He shed his blood and died on the cross. The peace knowing that we can run to be with him in heavenly places because we are already seated there, and we can be intimate with God now because of what Jesus did. The peace of knowing that one day will be home with Him again. Just like Dorothy...she was looking for that place, somewhere over the rainbow, but then she realized it was there all along. Just like the rainbow...it's always there, around us but we can only see it when sun and rain dance together and it's revealed.

Put your hand in his hand and step right on his feet...
Dance with your Daddy and let him lead...
THEN you won't grow weary and you won't lose your peace.
Trust me, it is much easier, and you WILL soar with Him! !!
All content is copyrighted and may not be used without written permission from the artist.