I am my Beloved's and He is Mine 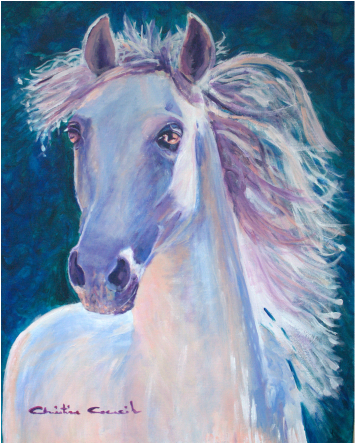 30x40 Acrylic on Stretched Canvas
I painted this for a gathering of Apostles and Prophets in NC at the Worship Center.  Before I went, I prayed and I saw something completely different.  I was preparing all week to release it, with the word God had given me.  The day before the conference, there was so much warfare, almost unbearable.  I could not seem to find any relief until I called a sweet sister and my spiritual Papa and they prayed for me, then finally the peace came.

So, as I drove, I just told the Lord, I really want to paint the first vision You gave me.  The first time God opened my eyes, in 2006, at a Mountain of Worship meeting, the Lord showed me a horse.  I was praying, just standing there, asking the Lord to open my eyes, and when a very large presence that felt like a ball came from above and hit my stomach.  It pushed me back about 10 ft or so, causing me to gasp for air.  No one touched me, or prayed for me...but I ended up flat on my back on the floor.

God's presence was very heavy on me, and while I was there, I saw a horse.  It was not a horse from here.  It was blues & purples and its mane was long and moved like it was under water.  The Lord very clearly said to me in that moment, "Get up and paint it", I said, "I can't do that".  In my years of professional painting, I always used a photo, never painted from my own inner vision, but then the Lord spoke again and said to me, "I will help you."  I got up and went to the area where they had oil pastels and paper out for people to use, and I started.  When I would get stuck, He would gently lay me down and take me again in the Spirit to the horse.  I was able to study the horse very closely, He let me look deeply into the eyes, I still remember them.  When I finished, I heard the Lord say to me...

"Delight yourself in Me,
and I will give you the desires of Your heart." 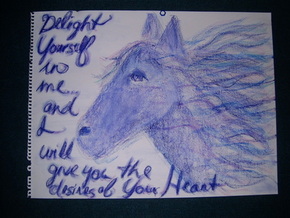 oil pastel on 11x14 paper
I remember after I put the drawing up, people came to me and said, that is a horse from heaven.  So many people asked me if they could have it.  I ended up giving it away, but gratefully I got a photo of it before I did.  One woman came to me and said, “That is your horse in heaven.”  She said, “We all have horses in Heaven.”  I thought that was so interesting.  Later in that same meeting, I saw a different horse, this one was running towards me, and He was a Pure White.  I knew that one must be the Lord’s.

The other day I came across a photo that looked like the horse I had seen, and a sister recently had encouraged me to repaint it.  So as I drove to the meeting, I said to the Lord, “I want to paint the Horse!”  I felt so much peace when I did.  So I decided to just go ahead and follow my peace.  To just delight myself in HIM.  It was a sweet reminder of that day when God touched me, opened my eyes to see in the Spirit, and He gave me a promise.  I am amazed and humbled by what the Lord has done and is continuing to do as I just move forward, just saying "yes" each step of the way.

I wasn't sure if the painting would minister to anyone or not, because I was doing it for me to worship HIM, but so many people were touched by the painting, many came to me and said God was really speaking to them about horses in this season.   Then God had one of their members bring a saddle into the church and people were taking turns sitting on it and as they did, God’s spirit would touch them.  So many are seeing horses in the spirit and even at the meeting, people were seeing a white horse come in with Jesus riding on it.  One of them said she saw Him come in as a bridegroom and pick up his Bride and put her on the horse with Him.

I think what God is saying is there are horses in heaven that need riders.  It is about us taking our place in the Kingdom.  God needs each of us to be and do what He has called us to.  And as we delight ourselves in Him, He will give us the desires of our heart, the desires of HIS heart too.

I call this painting, “My Beloved” because that is what He is to me and I am to Him.  I am my Beloved’s and He is mine.  As we become who He created us to be… His desires become our desires, our desires become His desires…  His will, becomes ours…ours His...and then we become ONE.
Delight yourself also in the LORD,And He shall give you the desires of your heart.
Psalm 37:3-5

Then you shall delight yourself in the LORD; And I will cause you to ride on the high hills of the earth, And feed you with the heritage of Jacob your father. The mouth of the LORD has spoken.”
Isaiah 58:13-14

About Benjamin he said: “Let the beloved of the LORD rest secure in him, for he shields him all day long, and the one the LORD loves rests between his shoulders.”
Deuteronomy 33:12

How handsome you are, my beloved! Oh, how charming!My beloved spoke and said to me... “Arise, my darling, my beautiful one, come with me.

Song of Solomon 2:9-11
My beloved is mine and I am his; he browses among the lilies.

Daughters of Jerusalem, I charge you— if you find my beloved, what will you tell him? Tell him I am faint with love.
Song of Solomon 5:7-9

This is my beloved, this is my friend, daughters of Jerusalem.
Song of Solomon 5:15-16

I am my beloved’s and my beloved is mine; he browses among the lilies.
Song of Solomon 6:2-4

I belong to my beloved, and his desire is for me.
Song of Solomon 7:10