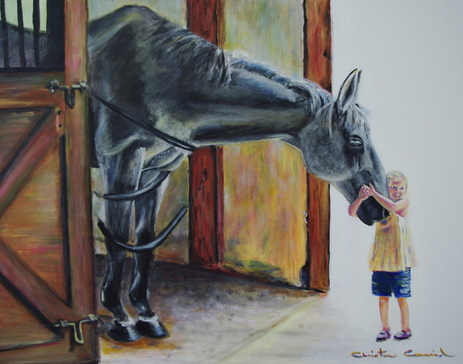 “Love & Honor” started with a vision and then became a treasure I found.   In the vision, I was a young girl with a horse, and I was in a stall, loving on Him.  He kept turning his head back and I finally figured it out...he wanted me to get on him and ride.  So, I jumped on his back and we began to run.  I have noticed when I see horses in my visions; they never have saddles, bits or bridles, no, they are free.  We rode past a waterfall on the right side, which I know means healing, and then to a broad place, like a cliff overlooking beautiful lands.  When we got to the broad place, there was a beautiful vista.  I looked out over the scenery, and I just laid down on the horse and overcome with love, began to weep and kiss him, telling him over and over how much I loved him.   It was so overwhelming, but I did not understand.

I just knew, I wanted to paint it, recreate what I had just experienced, so I went online to look for reference photos.  I came across this picture and I was so moved, I knew it was a treasure.  I contacted the photographer and asked if I could paint it in church, and she agreed.  Then she told me about the photo.  Polar, the horse had just come from the vet, and little Monica had come to see about him.  I was so touched how he bent his head down to let her love him and how her face is turned away, like she can hardly bear to look at this great work horse.

The painting represented so much to me, about what I believe God was speaking and this is what I believe it means.   The little girl represents the younger generations that are just coming up in the faith; the grey horse represents the older generations in the church that have been the work horses.  The horse is honoring this little girl by bending down to let her love him, and she is honoring him by hugging his head.  The grey in the horse represents wisdom, and the bit of gold and blue in his coat revelation and glory.  It is faded, but the little girl’s shirt and shorts are bright and full.  She has purple shoes on that represent the authority she stands in, but she has nothing to stand on, no strength or wisdom.  The horse is experienced, strong and powerful, the little girl small, innocent and vulnerable.    The stall symbolizes the church structure that is keeping the horse bound, stalled so to speak, and the straps are traditions of men that are not strong but more of a learned restraint.  The open door of the stall is speaking about opportunity.

The last move of God will come from the younger ones as they embrace the older generations.  And the older generations will have to bend down or humble themselves  and let them get closer.   If we could get the horse out of the stall and the girl on the horse, then I believe God could bring the endtime harvest!

Originally I was going to call the painting, Honor, but the last night I was painting, the Lord said to call it “Love and Honor" and I was thinking, that sounds like marriage vows.  Then someone came up to me at the meeting and said, from across the room, her arms looked like a bridle (bridal).  Then it hit me, yes, it did represent the marriage, between the generations that will happen through Love and Honor.  A bridle is also what you lead a horse with, and the Word says a child shall lead them.

I pray that we will let God marry the younger and the older generations, and that we will Love, Honor…and obey.

God had really been talking to me about honor, and around that time I saw a friend’s post on Facebook about his Grandfather and it made me weep, so with his permission, I am sharing it here:  “so my Granddad is going to be going up with God in the next few days but I can’t find myself being really sad because when I look at him; I see how God has used him to build a great army in our family.  Through him missionaries, preachers, teachers, pastors, worship leaders, and evangelists were born to go throughout the world, helping make a difference.  So without granddad even knowing it, God’s been using him to help change the world, because without this one man, my family wouldn’t be here to go out and change the world one man at a time ... it only takes ONE to make a difference.”

The way this young man was honoring his Granddad was so beautiful.  It made me think of the church and how it is becoming rarer to see this type of honor.  It is more common to see the younger ones talk negatively, critical of the leadership than to honor them.   Sowing dishonor will actually reap dishonor.  Some people want to be promoted in the church but they talk about leadership, sadly, they will never be honored. Judgement against leaders releases rejection, rebellion (spiritual leprosy) and barrenness!  Look at what happened to Miriam, and Michal when they spoke against Moses and David.  Miriam thought she could lead as well as Moses, Michal mocked Davids passionate dance before the Lord.  Because the Word says, God appoints leaders, they were ultimately speaking against God.  "Honor your Fathers and Mothers that it will go well with you in the land God is giving you."

The older more seasoned saints sometimes avoid getting close to the younger ones because they are “above” that or see the “children” as too much trouble, this dishonors the Lord because they are not helping them grow and mature.  God disciplines his children, discipline is training in love.

God confirmed this painting several ways.  I was invited to have lunch with Ken Helser and his beautiful wife, Linda on the way to the meeting in Moravian Falls.  It was so prophetic; they had no idea what I was planning to paint.  I love them because they are real people that let you get close enough to hug them.  They have served the Lord for years and years, and to sit at their kitchen table was an honor for me.  Actually, every time I see Ken, he honors me.  We met several years ago when I wrote to him about his testimony and told him it messed me up…he actually wrote me back.  That is how our friendship began, we were pen pals.  How many ministers today will take the time to love the younger ones?

I cried most of the lunch, as Ken told me how much he loved me, and the more he knew me, the more he loved me.  His wife made the loveliest lunch, and Ken told me that he had gotten strawberries just for me.   Can I tell you, I felt like a princess?  They did not have to do any of that…but they did…and that is why I love them so much…because they are people of Love and Honor.

I have friends in Moravian Falls that I have not seen for some time.  I had told them I would be there…hoping we could get together, but not wanting to be any trouble.  I considered leaving early the final day, but decided at the last minute to stay.  So glad I did because my friends called and said they wanted to see me.  I just cried.  They came to the meeting and I wept when I saw them.  The man is like a Papa to me as well.  The very first time I painted prophetic portraits; he came up to me and said, “You bless me.”  I only knew that this man was a “big time” prophet and I had heard people talk about him.  When he said that I was kind of confused, so I asked, “I bless you?  Why are you saying that?”  He said to me, “Because you minister with so much love.”  I cried, it meant so much to have this great "work horse" in the spirit encourage me and see my heart.  He continued to encourage me and has been there for me when I was going through trials and fiery tests.

So we went to dinner after the last meeting, others wanted to join us but he told them that his family wanted some time with me alone.  Again, I felt so honored…and loved.  After dinner, and right before I left he took my hand and kissed it...

All the way home I was just asking God, “why are you blessing me with these amazing relationships?  It is a little overwhelming.”  And He just said to me, because you Love and Honor me, I want to Love and Honor you.

I take you to be my wedded spouse.  To have and to hold, from this day forward, for better, for worse, for richer, for poorer, in sickness and in health, to love and to honor, 'till death do us part. And hereto I pledge you my faithfulness.

Ephesians 6:1-4 Children, obey your parents in the Lord, for this is right. “Honor your father and mother”—which is the first commandment with a promise— “so that it may go well with you and that you may enjoy long life on the earth.”  Fathers, do not exasperate your children; instead, bring them up in the training and instruction of the Lord.

No amount of ability is of the slightest avail without honor.   Thomas Carlyle
All content is copyrighted and may not be used without written permission from the artist.