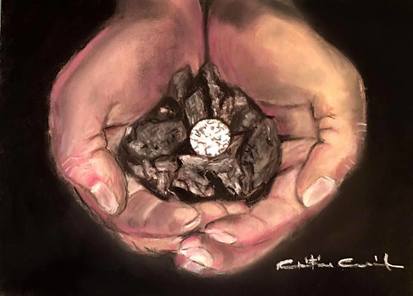 "Like a Diamond among Coal"
12"x16" Pastel on Canson paper

The other day I was with the Lord praying about a relationship I recently had to let go of. He was telling me, I was like "a diamond he got to hold for a moment" but had to let go of, because he could not yet handle the responsibly of such a precious gift.

I started thinking about the scripture in Song of Songs where it says..."Like a lily among thorns, so is my true love among the young women."

It prompted me to paint this and to do a little study on the difference between a diamond and coal. I hope and pray it will minister to you, especially all my single sister friends.

A Diamond vs Lumps of Coal
A lot of people think diamonds are made from coal being put under intense pressure, I thought that too, but found out, that's actually not true. While it is true, that diamonds and coal are both made from carbon, they have a completely different atomic structure.

Diamonds are Deep, and Coal is Shallow
Geologists believe, all diamonds were formed in the mantle and are delivered to the surface by deep-source volcanic eruptions.
Diamonds weathered and eroded from these eruptive deposits are now contained in the sedimentary deposits of streams and coastlines. Coal is a sedimentary rock, formed from plant debris deposited at Earth's surface. It is rarely buried to depths greater than two miles, so it is very unlikely that coal has been moved from the crust down to a depth well below the base of a continental plate.

Diamonds are Strong, Coal is Weak
The word diamond derives from the Greek word “adamas,” which means invincible or indestructible. The formation of natural diamonds requires very high temperatures and pressures. Under the immense heat and pressure far below the earth’s surface, the carbon atoms bond in a unique way that results in diamonds’ beautiful and rare crystalline structure. These conditions occur in limited zones of earth's mantle about 90 miles below the surface where temperatures are at least 2000 degrees Fahrenheit.
A diamond is the hardest natural substance known, so its interior should be very resistant to contamination. The only thing that can scratch a diamond is another diamond. Coal on the other hand is so soft, it will leave your hands dirty, if you touch it. Coal in its purest form is graphite, what we make our pencils from. God wants us to have clean hands.

Diamonds are Rare, Coal is Common
Diamonds are so precious, to produce a single one-carat diamond, 250 tons of earth will be mined. Coal is much easier to find all over, and very inexpensive to produce.

Diamonds are Expensive, and Coal is Cheap
Diamonds have been valued and coveted for thousands of years, often the property of Kings, not paupers. Roman naturalist Pliny is quoted as having said, “Diamond is the most valuable, not only of precious stones, but of all things in this world.” A pound of good quality diamonds will cost you, $11.4 M. On the otherhand, the cost of a TON of coal at the mine, is $37.24.

Diamonds are an Investment, Coal is Temporary
Diamonds are often bought to represent a commitment to love someone for all their life. They symbolize forsaking all others for another. They will continue to grow in value, and give back more than you have invested. Coal is a consumable resource, burned and destroyed, just to keep you warm. It also represents what you get at Christmas in your stocking, when you are bad.

Diamonds Reflect Light, and Coal Absorbs it
Diamonds are the most sparkly precious gem of all. They carry and reflect light so well, you cannot even read anything looking through them. Coal is black, the absence of light, so it will just absorb all the light, and not reflect it at all.

God will give you to the person who can best love and take care of you. I often think of a man being like the metal setting for a diamond ring. He must be strong, and made just right to hold that specific diamond, to keep it secure and safe, as well as lift it up high enough to be seen and best reflect the Light!

~selah
All content is copyrighted and may not be used without written permission from the artist.