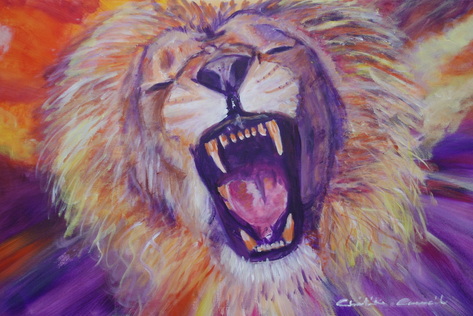 I was invited to paint at an event in Columbia SC.  There would be worship in the evening, and I would be painting then.  The heart of the meeting was to bring worship down from heaven to earth.  When I was preparing, I shared with a dear sister what I was considering painting, a recent vision where Jesus wanted to give me the keys to the kingdom, but I did not have a peace about it.  As we went back and forth, I told her, what I really want to paint is a lion, coming out of the clouds roaring.  So I quickly put an image together and shared it with her.  We both loved it right away and I had a knowing that this would be the right one!
I’d had a really horrible week, so much so I tried to get out of going, because I was just overwhelmed.  I had a couple of “Christians” attack me verbally, both of them were out of line, and wrong in how they treated me, but I just kept my peace and blessed them.  The word says, a gentle answer turns away wrath, so I decided to just stay humble, even though it was like satan  was using their mouths to try and heap condemnation on me.  After all this happened, my heart was grieving, I was longing for Jesus to come back, longing to have His kingdom established on the earth!  Longing for Him to roar over my situations, for the day I would be perfected.  I was praying for Him to heal and help these people that are not being a good witness of how a Christian should behave.
I could not sleep the night before, asleep at 8:30pm but up at 11pm, and I could not get back to sleep, even though I was very tired…actually exhausted.  I tried to nap that day, once I got to SC, just for an hour, but I could not.  This happens to me sometimes when I am going to minister someplace.  It will be like I am electric, and full of energy, so much so, that I cannot sleep.
That night, when the worship started, I just began to war in my spirit.  The worship music was just like what I was painting!  They even sang prophetically, about the lion of the tribe of Judah…and they could not see my painting.   The lead musician and trumpet player, came over later to look at my painting, and he could not even speak in English, he was just laughing in the spirit, and trying to talk, but it was just coming out in tongues.   As I was painting, I was weeping over the week I’d had, and over the church that is so polluted and dysfunctional.  I just wanted Jesus to come back in the clouds, and to come soon.
When I was done painting, I was invited to speak for a moment.  I just shared with everyone why I felt led to paint what I had painted.  I just told them about my week, and how I was longing for Jesus to roar over my situations;  that I was just ME being ME, expressing how I felt, worshiping Jesus.  It wasn't super spiritual, like I wasn't getting anything in particular from heaven, or interpreting the worship...etc.  I explained how I used to try so hard to get a vision to paint, and I was so serious about it, but then God had taught me to relax and just do what was in my heart, that He would use it, because He and I are one.  I encouraged everyone there to do that too, to just do what is in their hearts, and God will use it, too, because it will come from that place that is authentically who they are.  Rivers of living waters will flow out of you...you don't have to make it happen.  I believe the psalms are so beautiful because they came straight from David’s heart, a heart that was after God’s heart.   It really is simple.  It’s not complicated.

All content is copyrighted and may not be used without written permission from the artist. Kingdom come