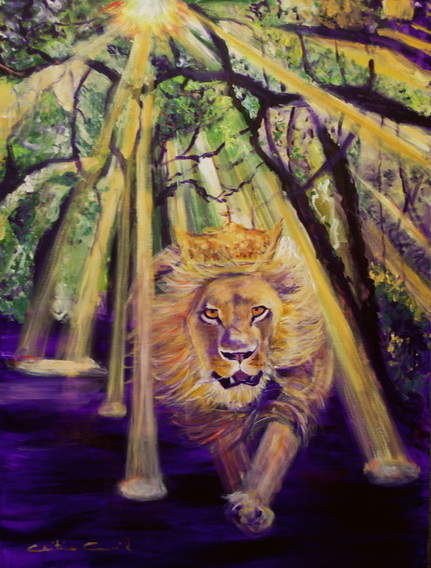 When I was invited to paint, I was reminded of a photo I had seen of a misty forest with glory rays several months ago.  I had gotten permission from the photographer to use it as a painting reference then.  I knew I was going to use it eventually, but wasn't sure how...or when...until I was asked to paint at this Experiencing the Glory Realm Conference with Leif Hefland, and Jason Upton.

I also remembered a corporate word I'd given recently.  I was praying for a woman, and saw a fire in the garden of Gethsemane, then I saw Jesus in intercession beside it.  He was crying out..."Don't let the fire go out for my people.  Don't let my sacrifice be in vain."  After I gave it, I fell out, it was that heavy, I could not stand.  Turned out it was the festival of Purim as well, and I had no idea.

When I remembered the word, I started seeing Jesus as the Lion of Judah in the garden...wearing his crown.  Because it all started in a garden...then He bled and fought in the spirit to submit His will in a Garden...when He comes back...I imagine He is going to run through a garden!!!  The image reminded me of the mount of olives.  I shared it with my spiritual mom and she gave me a scripture.
"And in that day His feet will stand on the Mount of Olives, Which faces Jerusalem on the east."
(‭Zechariah‬ ‭14‬:‭4‬a NKJV)

The garden of Gethsemane is at the foot of the Mount of Olives.

I took that as a confirmation.

So I planned my painting, drove to Atlanta...set up and started to paint the "King of Glory."  Right away, before I hardly had anything painted, Jason Upton started talking about walking through a forest with glory rays shinning through a forest.  Another confirmation...
Then later RIGHT as I was painting the glory rays he spoke of it again.  He actually said, I see the rays of glory light coming down.

Then he talked about the garden, he said it starts in a garden, so you will always return to the garden!!!  Yes Lord YES!!!!!!!

When I finished, someone came up and said, you were flowing together so well in the spirit, "it was like you were illustrating his sermon!"

Even so, come Lord Jesus!