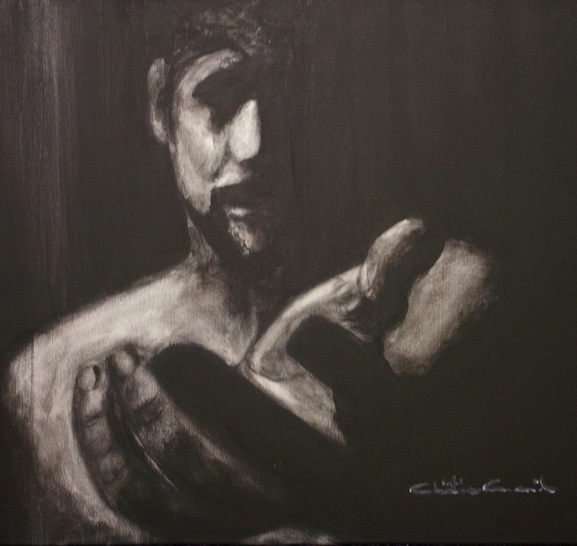 I painted this one on Duke campus for an outreach called Blue Flame Worship Explosion.  I almost didn't paint because it was cold and rainy, so the gathering there was not very big.  I was talking to a friend on the phone when I arrived, telling them about the situation, trying to decide what to do, and she said, "even if there was one, Jesus would go."

One of the coordinators came to help me unload my stuff...and I asked her, "do you think I should go through the trouble to unload since there are not too many here?" and she said the same thing my friend had said, that they prayed and said to the Lord, if it is just for one, then they would be faithful.

Once I was set up, His presence came on me so strongly, I just trembled and wept.  It seemed like He wanted to encourage me for being obedient to paint even though it was not an ideal situation.

Originally, I had planned to paint a blue flame in His hand because it was a vision I had the year before, but as I painted it, I felt it was just like He wanted it without the flame.

Because it was cold and rainy, the paint was not drying, so I just started bringing the light into the darkness by removing the black paint.  I wiped it, cleaned it off using paper towels, and used wet brushes to remove the dark.  I loved the affect and it seemed to match what God was doing there.   I was also encouraged when the speaker got up and his first words were, "Go to the dark places!!!!"

John 1:5
The light shines in the darkness, and the darkness has not overcome it.
John 8:12
When Jesus spoke again to the people, he said, “I am the light of the world. Whoever follows me will never walk in darkness, but will have the light of life.”
John 12:46
I have come into the world as a light, so that no one who believes in me should stay in darkness.
2 Corinthians 4:6
For God, who said, “Let light shine out of darkness,” made his light shine in our hearts to give us the light of the knowledge of God’s glory displayed in the face of Christ.

$45.00
Add to Cart
All content is copyrighted and may not be used without written permission from the artist.