The first time I ministered publicly, I created what I called “prophetic portraits.”
I had never seen anyone do them, it had just been in my heart for years. I could see things when I prayed, thought everyone could, had the idea to draw what I saw for people, so they could see it too.
I had been a portrait artist for many years, so that was where the name, “prophetic portraits” came from. In April 2009 at a conference, Teresa Ward of Above and Beyond Ministries got up and shared about an upcoming event she was planning, it was to be a Dream Extreme conference in Charleston, SC. She said there would be arts there, and encouraged people to step up and come be a part of it. I felt led to approach her and tell her about what was in my heart. I offered to come and test the waters, so I asked her to pray about it, and immediately she said, "Oh no, you ARE coming. Do you know how long we have waited for someone like you to come forward?"
Janice Van Cronkite was there also, it was my first time meeting her, and I shared my heart with her. She was so gracious and prayed for me at the back of the church. I bought one of her pieces, "the Metamorphosis" and while I was holding it, someone came up to me and prophesied that I was about to go through a metamorphosis. They could not see the print, so it was a confirmation to me that I had gotten the one the Lord wanted for me. 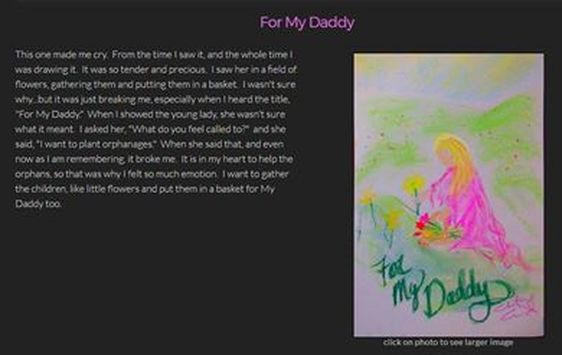 In July I went to the Dream Extreme conference, set up my little table, and the first day, not many were signing up for ministry, but by the 3rd day, people were squeezing into every free moment I had to get their own image done.
I saw people healed, delivered, and changed by these childlike little sketches. I would leave during breaks and go to weep with the Father. I was undone by His faithfulness to minister through me!
People would come sit at my table, and I would just begin to pray. I would see an image for them. God would have me sketch it, without them seeing...and then I would share it with them when I felt I was “finished.”
One of the young women I prayed for that day, I saw her in a field, and she was gathering flowers. and putting them into a basket. She was very young in the image, just a little girl. I began to weep...I could hardly speak to her. I was overcome by tears.
As often is the case, I did not understand what God was showing me. I began to question...”What is this, what are you showing me?”
I heard nothing, but her heart saying, “For my Daddy”
I wept even more. What could this mean? Did she lose her Father? Why was I weeping so uncontrollably? Being a seer, means you feel so much, and sometimes it doesn't make any sense...
So I showed her what I had drawn, and she looked right at me and said. “I have no idea what that means.” Don't you love it when that happens? LOL
I said, while wiping away my tears, “Neither do I. Maybe I painted it for myself?”
So I waited on the Lord, and then I felt led to ask her, “What do you feel called to do?”
She said, “I want to plant orphanages.”
OH MY........
THEN it all made sense. I remembered, when I see flowers in the spirit, it usually means children. I was weeping, because that is my heart too. I am a Mother in the Spirit. Many people have prophesied that word over me. At first, I did not like it, motherhood, for me, had been a tough, lonely road, but, since then, I have been told, by so very many, this is God's will for me. And I have accepted it.
Yes...I can see it now...I will "adopt" and take care of orphans all over the world. Spiritual, and natural. That is part of the reason I started painting...I was hoping God might use my gift to make money to help them.
Then...I knew, and understood, I was weeping, because I was feeling it too. Yes Lord.
I started working a seasonal job, at a Garden center recently. I felt led by God to do so. I studied horticulture in school, and love to garden. While I was there, God reminded me of this prophetic portrait I had painted many years ago. Surrounded by flowers, God brought it back to my memory. I wanted to paint it. The unction was strong to do it soon.
Then, just the other day, I realized, it was because He wanted me to paint this for Mother's Day!!! The MOST popular day of all for Garden Centers! That is no coincidence! Mothers love flowers!!! Of course they do!
I got a call, right after God told me, and I was invited to speak tomorrow morning, at a prison church service. I am going to share a sermon, my first one ever. I have never done that before. Then after that, I will go to a church and share there too. Double blessings!
I am just marveling at God, how He sets me up. How He orders my steps. How He blesses me. Just undone by His goodness and grace.
Best Mother's Day present EVER!!!
You see...I get to look into the eyes of those prisoners and tell them, I love them...and God does too.
I know, one day, many orphans will call me Momma Chrisie...and I can't wait for that day.
Happy Mother's Day to me...
and to all of you!!!!
With Love, for my Daddy.
All content is copyrighted and may not be used without written permission from the artist.