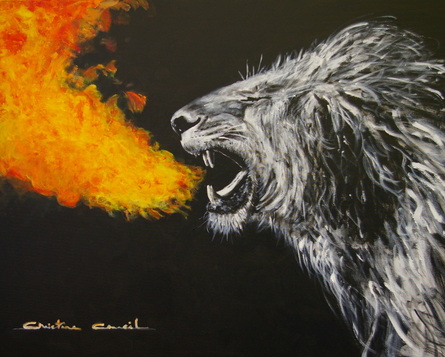 36 x 48 Acrylic on Stretched Canvas
This was painted at The Worship
Center in Durham, NC Nov. 2011, at the Awakened Love Conference with David Dodd.

Some of them see nothing wrong with it, and when confronted, they defend it saying that they can’t help it.    What a lie from the pit of hell.  Truth is, they can help it…you see, the same power that conquered death is living inside of them.   Either they WERE saved or they were NOT.  But, if they were saved, they will LIVE like they were.

You know, it is not ok with God, when people choose to sin, it is actually like a cancer in HIS body --the body of Christ that you and I are part of, that He is still the head of.   Imagine if you heard from the Dr. that you had cancer somewhere in your body…imagine how that would break your heart...how it would grieve you.  How you would do anything you could to make it go away.

The other day, I was talking to someone I had recently prophesied to.  He was telling me how he was living a "Job" experience.   How he had lost everything, his church, where he was pastor,  his wife that had been healed and come out of a wheelchair, she even ended up back in that wheelchair and left him, he lost his home, money...he had lost it all.   He said God took them from him.   Something about that just did not compute to me.  Prophetically, I started getting angry in my spirit about it, so I asked him straight out, “was there any sin in your life when it happened?”  Taken off guard, he said…”what?”  I said, “was there ANY sin in your life, when you lost everything?  Like, did you cheat on your wife, did you embezzle money from the church...did you get on the internet Brother?”  Finally he confessed, it had an internet porn addiction.

I have to tell you, I was mad.  I was furious.  I was so on fire.  I said, “you are not living a "Job experience", Job was tested because he was righteous!”   I said to him, “what you are living is a Sampson experience!!!!  You were a blessed man, but you chose to serve your flesh and not God.  So now you have been taken captive, your eyes have been blinded; you are in prison and going around and around the millstone because of the sin of lust in your life.""

I was mad at him for being foolish and letting satan do this to him, to his wife, and church, but I  was even angrier at the enemy for what he had done to this man, for what he had stolen from him.

He said, “I don’t know how to stop.”  I said “put your computer outside and take a sledge hammer to it!!”  You have to fight for your freedom!!!  The Bible says to cut off your hand if it causes you to sin.

I felt the fire of God coming out of my mouth as I spoke to him, preaching for a long time as he humbled himself and wept.   It wasn't a fire of judgment, it was pure love.   He thanked me over and over for preaching to him.   He thanked me for caring enough to release the cleansing, healing, refining, restoring FIRE of God’s truth on HIM.    He humbly received the correction of God and repented.

Since we talked that night God has given this man so much grace, and because of His humility he is FREE from his addiction to porn.  He said his life has turned completely around.  He is amazed at all God has done, and the people at his church have commented that they can see a difference in him.  He calls me his angel.  Trust me, I am no angel, and it wasn't me that set him free, it was the Fire of God, that I released over him.  All I did was choose to get involved in this man’s dirty little secret and confront him in love.

This painting is symbolic for me of what God longs to do to HIS BRIDE!  To rescue her…set her free, set her on fire, refine her, cleanse her, and purify her.

“In my distress I called to the LORD; I called out to my God.
From his temple he heard my voice; my cry came to his ears.
The earth trembled and quaked, the foundations of the heavens shook;
they trembled because he was angry.  Smoke rose from his nostrils;
consuming fire came from his mouth, burning coals blazed out of it.  2 Sam 22 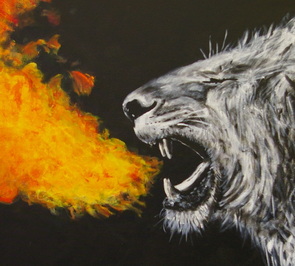 I love the Narnia series.  My very favorite part is when Aslan roars, there is one scene where the witch challenges him, questioning his integrity, whether He will come to be sacrificed, when He said He would, and Aslan just looks at her and roars…then she falls back.  I get so excited in my spirit when I see that because you cannot argue with truth.  It is absolute and will always be victorious.   That is why I chose to paint the Lion of Judah in black and white, to represent the truth...and because it is plain.

I chose the name Ruwa, because it means to shout a war-cry or an alarm, or to shout in triumph.

In the book of Numbers king Balak hired Balaam to curse Israel and each time only blessing would come from his mouth. During his second attempt at cursing he made the following declaration in Numbers 23:21:

The Lord his God is with him, and the shout (ruwa) of a King is among them.

Psalm 47:1 Oh, clap your hands, all you peoples! Shout (ruwa) to God with the voice of triumph!

You're cheating on God. If all you want is your own way, flirting with the world every chance you get, you end up enemies of God and his way. And do you suppose God doesn't care? The proverb has it that "he's a fiercely jealous lover." And what he gives in love is far better than anything else you'll find. It's common knowledge that "God goes against the willful proud; God gives grace to the willing humble." James 4:4-6 (MSG)

After I got home from painting, I found this song, I had heard it before, but the words just amazed me and it was like God put it in my path...and wanted me to share it alongside my painting.