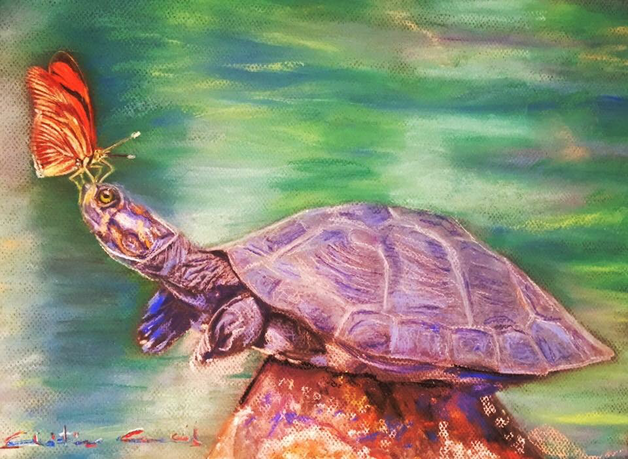 Did you know, in the Amazon, butterflies delicately kiss away the tears of their turtle friends? Well, that is the fairy-tale version, anyway...but the more logical explanation is:
it's an insect in search of nutrients: in this case, salt.

You know...
I didn't know this either…until I had a dream, about a very salty kiss...and that eventually led me this discovery.

Turns out these butterflies are in the middle of an extreme salt craving, because butterflies need it for their metabolism and in order to reproduce, but in the Amazon, it is in short supply. Most animals get it when they eat other animals, but butterflies don't eat at all...they just drink.

These little fragile creatures are so gentle and sensitive, they can even taste through their feet. Turns out, turtles don't even mind, and let the little butterflies drink their tears.

Why would God design this?
What an interesting combination.
What an unlikely friendship.
What a high contrast.
Like complementary colors,
on the color wheel, they are complete opposites.
Every artist knows...using them side by side, they make the other color, more colorful, more vivid, and cause it to stand out.
Ahhhh...a relationship so symbiotic…and somewhat symbolic.
So very precious.
And so like God.
This is a union only God would put together.
To be a sign and a wonder to the world.
A fragile, beautiful delicate creature, with wings created to reflect the light. An insect who won't live very long…but has the ability to fly--drinks the tears of a strong, hard shelled, fortified, slow moving, stable, stationary, and long living reptile?

In the Bible, salt was required for every sacrifice, even in the incense that would be burned on the altar...incense represented our prayers. It also was a sign of a covenant between people in the middle east, that if someone shared a meal in another's home, they would have a pact, that meant, “I have your back.” The saying is. “We have salt between us.”

Salt was combined with unlikely things. To make them both palatable.

In 2 Kings 2:20-21, Elisha used salt to heal a body of water so it could be drinkable. Now think about this for a second. When salt is added to water, one gets salt water, not fresh. You might use salt water to gargle, but certainly not to drink. Now imagine what was going through the minds of those watching Elisha throw salt into their putrid water hole.

“Elisha, wait one minute! You’re going to make the situation even worse! Are you sure the Lord said to do this? It doesn’t make sense, Elisha. Why would you waste valuable salt by throwing it into an already bad source of water? You’re just throwing it away!”

Why would Elisha do it? Because he had heard God and he trusted Him.

After Elisha threw the salt into the water, it “became wholesome”. How would the people know it was good to drink? They would have to trust God enough to dip their hand into the water and draw it to their lips. Pouring salt must have seemed like a crazy thing to do to them. But when it comes to walking with our God, isn’t this what it takes – going against the way we think to do what He tells us to do?

This is the same idea behind Job 6:6 when Job makes the point: salt is added to tasteless food to make it worth eating. Again, isn’t this just like our God to make something tasty out of two things that don’t belong together? The question is, “Will we trust Him?”

Colossians 4:6 says, “Let your conversation be always full of grace, seasoned with salt, so you know how to give an answer to everyone.” The context is about sharing the gospel. Paul told the Colossians to be wise in how they acted (trust in action) towards those who don’t know Jesus so they could make the most of every opportunity to share their story of how He had changed their lives. Hmmm...that is evangelism.

How does this happen? Romans 12:1-2, is the Covenant of Salt in action. When we offer our bodies as living sacrifices (salt was added) we are dying to self and living for God. How is this seen? Trusting God at His Word (basis of a covenant) and allowing Him to change our lives on a daily basis (“transformed by the renewing of your mind” transformed is the same word for metamorphosis).

As you agree to worship Him through your every day actions, even when it costs you something or goes against your way of thinking, you’ll become salty, which will make people thirsty enough to ask, “Where do you find your peace in the midst of tough times? How can you live the way you do when everyone else is doing the opposite?” Those who are the salt of the earth will automatically be the light of the world and will be ready to shine their light on Jesus.

It is your choice. You gotta serve somebody. Your actions will tell whether you are serving the Lord or Satan. What do your actions say about you? As a believer, if you don’t serve Jesus, your life will not only be unsatisfying, but it will also lose its meaning and purpose. You’ll become what Jesus said happens to salt that is no longer salty, “Trampled by men.” Why would anyone want to listen to you?

So, I believe this unlikely friendship between the turtle and butterfly is speaking to me...
How sweet,
(and salty) is that?