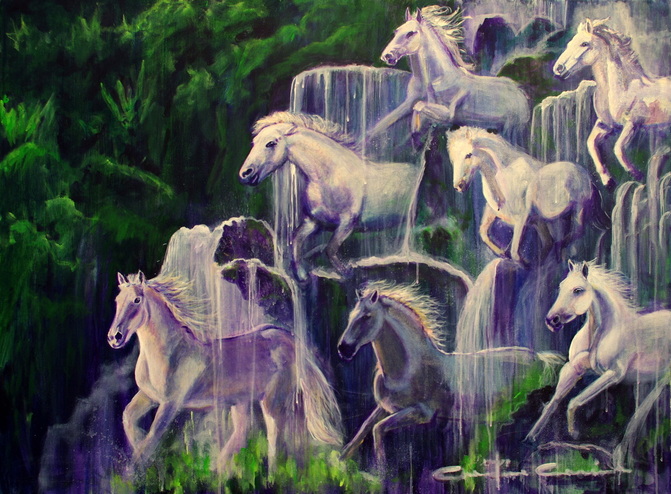 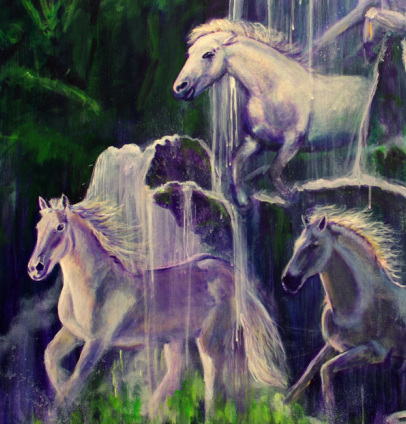 I was in Moravian Falls for the School of the Seer’s conference and one night, I had the thought, I want to go to the prayer mountain, because I will see golden orbs when I get there, but it was very late, and I have never seen orbs in my life.   It was like an obsession, so I went into the lobby and there was a group of people I knew  talking about going.  We decided to go the next night after the meeting.

When we got there, everyone divided up to “see” what they could “see”.  I went down the side of the mountain a little ways by the prayer shack there and I looked over to my right.  I asked the Lord if I could see something.  I heard the sounds of Native American Indians…cries and calls, the sound of war drums.   Then I saw and heard a stampede of horses and could see they were white.  There were no riders.  I had the thought, “It’s like a river.”  It happened so quickly and came to me so easily, I thought, I must have just made that up.

When I got back to the top of the mountain, I shared what I had seen with a small group of people to see if it meant anything to them.  One of the women, after I told her about what I had seen, said something about “Breakthrough” and it stuck with me.  As I shared, I started to smell a scent I began smelling when Bob Jones took me to heaven at a conference the week before, also in Moravian Falls.  I asked them if they could smell it.  They said, maybe, but they were not sure.  I knew they did not smell it then…because it was so strong it was intoxicating.  We chatted for a bit, but then they all decided to go back early. 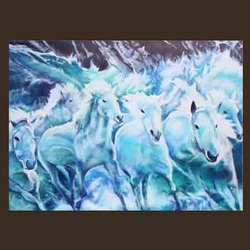 Later when I got back to the conference center, I saw an artist, Jana Binning Green that came with Paul Cox from California, and I told her what I had seen, to see if it meant anything to her.  She started laughing and said, “Let me show you something.”  On her phone was a picture of a painting she had done recently and it was of a herd of white horses running through water, and it was called, “Breakthrough!”  Oh wow…she and I were just undone by that.

Later at the conference a couple of the people that had been in the group with me on the mountain said when they got to the car to leave, the scent hit them like a waterfall!!!  Glory to God!  Oh how that ministered to me!

That smell was around me the whole conference.  I stopped people in the lobby where there was something that seemed like a pool of it…it was where I first smelled it at the conference.  I would stop people and ask them if they could smell it.  They said they could and if I moved my hands toward other people close by, they could smell it too.  When it first happened and I shared it with Bob Jones, he asked me if I knew what I was smelling?  I did not.  He took me to 2 Corinthians 2

14 But thanks be to God, who always leads us as captives in Christ’s triumphal procession and uses us to spread the aroma of the knowledge of him everywhere.  For we are to God the pleasing aroma of Christ among those who are being saved and those who are perishing. 16 To the one we are an aroma that brings death; to the other, an aroma that brings life. And who is equal to such a task? 17 Unlike so many, we do not peddle the word of God for profit. On the contrary, in Christ we speak before God with sincerity, as those sent from God.

Then he said, you are smelling yourself.  Wow…I just wept!

On the last day of the conference, Paul Cox began to pray for Moravian Falls.  As he prayed and Kevin Basconi “saw”, Paul discerned that there was blood on the land, that the American Indians had been involved in human sacrifice and shed blood.  So we prayed for the land to be cleansed.  For any sins that were committed against the Native Americans to be forgiven and any sins they committed to be covered.  Then Paul said that now that the land was cleansed, the true evangelists could go forward.  At the end, he said, “Breakthrough!”  I knew that the vision I’d had was definitely from God.   The Indians sounds, the water, the horses representing the true evangelists!

I left the conference and was painting at a different church a week or so later.  I shared about the vision and the artist’s painting with someone at this other church.   The woman said, “We have a print of that painting!!”    I was like…”No way!?”

So the next night, she came up with the print, then she told me she wanted to give it to me.  When I looked at it I realized, it was not the same print.  But it was white horses in water, and this one was called, “Son’s of Thunder and it was painted by Leslie Marks.”  I was so blessed! 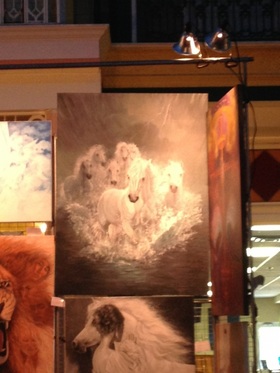 A couple of weeks later, I went to Morningstar for Harvestfest to be a vendor.  Beforehand, I asked God what to paint, and He said to paint the vision I had in Moravian Falls.  So I was prepared.

When I was setting up, there was an artist right across from me and she was amazing.  I thought to myself, “Wow, now that is intimidating.”  I was watching her set up her huge display booth and wondering if anyone would even see what I had in my booth.

After the artist across from me was completely set up, I looked straight across from me, and what did I see?  It was the very same print that was just given to me just a couple of weeks earlier.  If I had been one direction or another, to the right or left, it would not have been directly in front of me.  Then God spoke to me and very clearly said,” I am in this and you are in the right place. “  I knew I was.  I would be painting in my vendor booth during the services, not to be seen, but to be obedient, to worship God...and the Lord told me to call it Moravian Falls “Breakthrough!”.  During the breaks, I would hide the painting and put up a finished piece  while people were in the vendor space.   I only shared it with a couple of people. 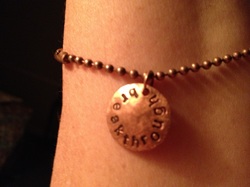 One day, near the end, a woman, Lora, that had a booth a ways down from me,
came and said, “God told me to make this bracelet for someone, but I did not know who, but when I saw you, I knew it was for you.” I opened the little box, and inside was a bracelet with a small hammered copper shield, she had put the word “Breakthough” on it.  She had not see my painting...and she said I was about to have my own breakthrough!!!  Yes Lord!
Halleluiah!!!

You can order one for yourself from my sweet friend Lora here:  http://www.etsy.com/shop/eagerhands?ref=seller_info


When I got home and started to meditate on all God had shown me…  I had the thought…”doesn’t it say you are the “God of the Breakthrough” somewhere in the Bible Lord?”  But where?   I did a quick search, and I found it.  When I did, I got so excited!  This is what it said:

1 Chronicles 14:11 And he went up to Baal-perazim, and David struck them down there. And David said, "God has broken through my enemies by my hand, like a bursting flood." Therefore the name of that place is called Baal-perazim.