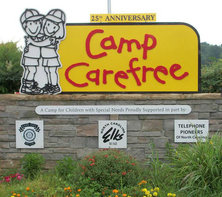 The other day I was in Stokesville, NC working and having an especially long stressful day when I drove past a sign that caught my eye.  It said, "Camp Carefree:  Where Kids Can Just Be Kids."  When I saw it I thought it was cute, and it sounded really good after my long hard day, besides, I needed a hug, so I pulled into the entrance.

It was beautiful inside, rolling hills, trees and fields.  I saw sheep, llamas, goats and horses.  There was one horse in particular that caught my eye.  He had blue eyes and beautiful coloring.

As I was driving through, I ran into the caretaker of the camp and asked if I could just drive around and take photos.  He said, ”Yes, did you see the lake?”.   I had not, so he gave me directions down the hill, and I was off to watch the sunset over the water.  It was beautiful and serene, an oasis of fresh water to satisfy my thirst for peace. 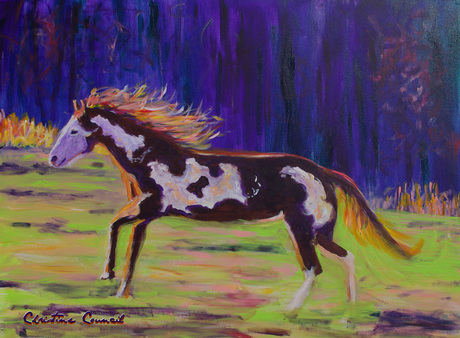 After the sun had set, I headed back up the hill and saw the horses again.   The one I had seen earlier was walking up a hill, and the setting sun was backlighting him making his mane glow with the colors of the fiery sunset.  I grabbed my camera to capture the beauty of the moment when all of a sudden the horse turned around and began to run.  I was in awe, and had just been saying to the Lord how I longed to see a horse running!!!  I watched him take off, as his mane caught the wind and tail flowed like a river of fire!  He was running to the caretaker that had begun to put out feed.

I thought of so many in the church that can't run freely, how they are bound by unhealthy relationships, religion, sins and compromises.   It made me tear up as I watched this one run, then I was reminded of a vision I'd had a couple months ago.

In the vision, there was a horse, and he was in a field.  He was stomping the ground and his tail was swishing back and forth; he was neighing and snorting.   I could tell he was frustrated and antsy for something.   Then, just like this horse, he turned and started to run.  The sound of his hooves on the ground was so powerful; his face filled with determination…it was amazing to watch.  Then all of a sudden, there was a fence before the horse, white and structured, your typical white washed picket fence, but he did not slow down, he jumped right over it!!!  The vision freeze-framed as he was over the fence, then the Lord spoke and said, “My horses are tired of being in fences, it's time for them to break free and RUN!”   "Break free" means to get out of a traditional or montonous way of doing something.  I felt the white washed fence represented churches that had long lost their power, more concerned about their image, with the horses "safely" confined and unable to RUN they could keep them under their control! 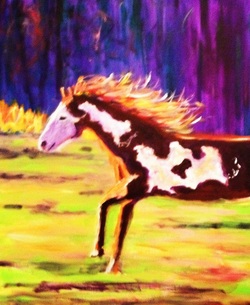 I felt led to paint this at the David Hogan conference Greensprings Chapel in Williamsburg, VA.  It seemed to be appropriate because David is such a WILD horse himself, truly running the race set before him and Greensprings Chapel is such a place of LIBERTY, they want all their horses to run the race.  I had met someone recently that was bound in an unhealthy relationship, so I wanted to paint it as intercession for all those bound and unable to run for what ever reason.  I found out as I was preparing, that Carefree Camp was a camp for children with handicaps and sicknesses that also keep them from living a life of liberty.  This camp gives these children a place to be carefree, a place where kids can just be kids!!!!  This horse was in a fence, but I decided to leave the fence completely out of the painting, because I wanted the painting to represent complete freedom!

I did not know what type of horse it was, and had not taken time to look it up, but had a feeling that it would be relevant.   After I posted a photo of the painting on FB, someone said, “notice it's a mustang lookin horse-totally free in life.”   So, I went and researched, turned out the one I painted is actually called a “Painted" Mustang, and they are often referred to as free-roaming wild horses.   The US Congress recognizes Mustangs as “living symbols of the historic and pioneer spirit of the West..."  Like the horses, God is calling His people to pioneer for Him, and to be free to roam the land again!

As I was driving home from the conference, this song by Misty Edwards came on my ipod...
It is for freedom that Christ has set us free. Stand firm, then and do not let yourselves be burdened again by a yoke of slavery.   Galatians 5:1

Therefore, since we are surrounded by such a great cloud of witnesses, let us throw off everything that hinders and the sin that so easily entangles, and let us run with perseverance the race marked out for us.   Hebrews 12:1

“Do you give the horse his might? Do you clothe his neck with a mane? Do you make him leap like the locust? His majestic snorting is terrifying. He paws in the valley and exults in his strength; he goes out to meet the weapons. He laughs at fear and is not dismayed; he does not turn back from the sword. Upon him rattle the quiver, the flashing spear, and the javelin…
Job 39:19-25 ESV