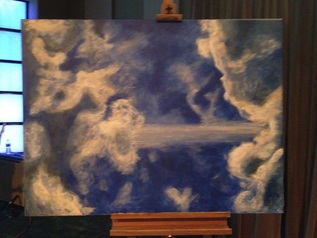 I painted this on 9/11 2014 at an Iris conference in the Richmond, Va. area.  I was invited by the Dwelling Place Church in Williamsburg.

On September 2nd after the third beheading, I felt overwhelmed to fast and pray for America and to rally others to pray too. So I started an event on Facebook to last up until September 11 called "Pray for America!!!"   Over 300 people signed up to pray with me. So every day I would seek God about what to pray and each day I would cover whatever was on my heart.  I covered our government, safety, media…etc.  On the 8th of September I began to seek God about what paint for the conference, and because I'd been praying for America, it was already in my heart, so I just felt led to paint something as intercession for America.

I wanted to paint the American Flag, and I was wondering what to put with it.  I had saved a picture of an eagle several years ago and I just felt so drawn to it.  I saw under the eagle the red and white stripes and as a background,  I saw clouds.

The Eagle's right wing was dipping into the red and white stripes that were like water.

I knew I would only have two days to paint and was talking to the Lord about how I wish I had some clouds to paint over when I remembered a canvas I had painted a vision on a couple of years ago.

In the vision, I had seen myself on a road made of clouds in heaven, and I was riding a red four wheeler.  I was hearing the song "Born to be Wild".  I thought, this is very unusual, but when I read the words, the part that stood out to me most of all were the words "going to take the world in a love embrace".  I also asked the Lord where in the Bible it talked about a heavenly highway, and He led me to Isaiah 35 and just wept as I read about this place of holiness.

The next day or so I was working when I looked up and I saw a cloud that looked like what I seen in my vision. It just blew me away so I took a quick picture of it.  I felt led to paint the photo at a conference, in High Point, at New Day Church.  I was supposed to release what I had seen in heaven, on earth.  After I finished the painting, I felt that something else was supposed to go on it, but I never got the revelation as to what God wanted, so, I never did anything with the painting, never made prints or shared about it, I put it away in storage.  A couple weeks earlier though I had been asking God again about that painting, what I should paint on it, but there was no answer. 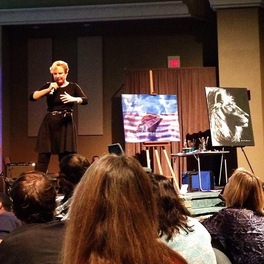 After He reminded me of those clouds, and that vision, I pulled the painting out and started to research, then I realized I had painted it exactly 2 years earlier on that very same day, September 8th, 2012.  I knew God was in it and He was confirming He wanted me to paint over these clouds.

When I shared my vision with a sister, she told me that the right wing of the eagle is very symbolic. She had been given a right wing Eagle feather from a chief and was told it meant moving forward swiftly into the things of the Spirit.  The Eagles body was to be painted across the "highway."

It made me think of the right wing conservatives, and how we are going to have to dip our wings in the water, and be the ones to pray.  Later I heard Rick Joyner warn that we need to stay balanced and not react because of what is going on with the left wing.  I think prayer will help us stay balanced!

I was telling another friend about my vision for the painting and they sent me an image they got when they were in the service, we were both blown away at similarity of the two images.  Seemed to be more confirmation.

After I set up to paint I continued to get confirmations, one of the most blatant ones was a man right in front of me who had on a shirt on with an american flag and an eagle... He was walking right ahead of me as I walked up to begin to paint!  Later I thanked him for wearing that shirt.

As I was painting I had the thought to let the white drip onto the red stripes and the red drip onto the white stripes.  I wept as I did and it made me think about the blood of the soldiers who gave their lives for our liberty, and the tears of the saints that were shed for our country.

The next day I met some people for breakfast and God had me confront them with their sinful life and called them to repent...to turn back to holiness. When I was leaving there was a license plate right beside my car and it said Love52.  I thought it was interesting, Five is Grace/favor and  two is discernment.  It also made me think of 1John because that's one of my favorite love books. So when I looked up the scripture it was also a call to obedience.  God was saying if you love me you'll obey me, if you love others...obey me.

When I got home from painting I started asking God, why you sent me there, and why had me paint that. I was led to read about Williamsburg and discovered it was our first capital, and the place in Virginia where the American Revolution was planned.  I felt that was to be the name of the painting.  I went to look up the word revolution and I discovered it means to completely change suddenly and to turn around. That's repentance, and not only that when you turn the word around the word love appears in it!  It made complete sense God is calling America to repentance. To the highway of holiness, and that place where we love one another and the ultimate place of love is Holiness! 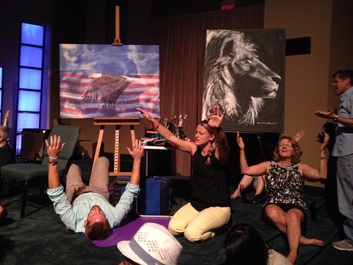 People worshiping around my paintings
A couple days after I was home, I got a message from a spiritual daughter, It was a post on Facebook by Larry the cable guy, saying "this was over Texas". It was a photo of an American flag appearing in the sky.

I was so excited because it appeared the day before I painted the flag, so I begin to research and discovered it was actually seen over the Richmond, and the photo was taken 8.6 miles from where I painted the flag.  No…not in Texas but in Virginia!!!

They even ended up eventually putting it on Fox and friends (below) because it was such an amazing phenomenon, and so many people saw it.

So I believe God gave me this painting as intercession;  to pray for God to move in our country, for prophets to rise up with eyes to see, for and in America.  To be like an Eagle to moving forward swiftly into things of the spirit, on the heavenly highway of holiness.  To change and turn from our sins.  To take the world in a love embrace, to pray for a true American Revolution so that we will love God and others and to pray for America!
Post by Fox & Friends.
Isaiah 35:1-10 (AMP)
1 The wilderness and the dry land shall be glad; the desert shall rejoice and blossom like the rose and the autumn crocus.
2 It shall blossom abundantly and rejoice even with joy and singing. The glory of Lebanon shall be given to it, the excellency of [Mount] Carmel and [the plain] of Sharon. They shall see the glory of the Lord, the majesty and splendor and excellency of our God.
3 Strengthen the weak hands and make firm the feeble and tottering knees.
4 Say to those who are of a fearful and hasty heart, Be strong, fear not! Behold, your God will come with vengeance; with the recompense of God He will come and save you.
5 Then the eyes of the blind shall be opened, and the ears of the deaf shall be unstopped.
6 Then shall the lame man leap like a hart, and the tongue of the dumb shall sing for joy. For waters shall break forth in the wilderness and streams in the desert.
7 And the burning sand and the mirage shall become a pool, and the thirsty ground springs of water; in the haunt of jackals, where they lay resting, shall be grass with reeds and rushes.
8 And a highway shall be there, and a way; and it shall be called the Holy Way. The unclean shall not pass over it, but it shall be for the redeemed; the wayfaring men, yes, the simple ones and fools, shall not err in it and lose their way.
9 No lion shall be there, nor shall any ravenous beast come up on it; they shall not be found there. But the redeemed shall walk on it.
10 And the ransomed of the Lord shall return and come to Zion with singing, and everlasting joy shall be upon their heads; they shall obtain joy and gladness, and sorrow and sighing shall flee away.

5 Whosoever believeth that Jesus is the Christ is born of God: and every one that loveth him that begat loveth him also that is begotten of him.

2 By this we know that we love the children of God, when we love God, and keep his commandments.

5 Who is he that overcometh the world, but he that believeth that Jesus is the Son of God?

7 For there are three that bear record in heaven, the Father, the Word, and the Holy Ghost: and these three are one.

8 And there are three that bear witness in earth, the Spirit, and the water, and the blood: and these three agree in one.

11 And this is the record, that God hath given to us eternal life, and this life is in his Son.

14 And this is the confidence that we have in him, that, if we ask any thing according to his will, he heareth us:

15 And if we know that he hear us, whatsoever we ask, we know that we have the petitions that we desired of him.

16 If any man see his brother sin a sin which is not unto death, he shall ask, and he shall give him life for them that sin not unto death. There is a sin unto death: I do not say that he shall pray for it.

17 All unrighteousness is sin: and there is a sin not unto death.

18 We know that whosoever is born of God sinneth not; but he that is begotten of God keepeth himself, and that wicked one toucheth him not.

19 And we know that we are of God, and the whole world lieth in wickedness.

20 And we know that the Son of God is come, and hath given us an understanding, that we may know him that is true, and we are in him that is true, even in his Son Jesus Christ. This is the true God, and eternal life.