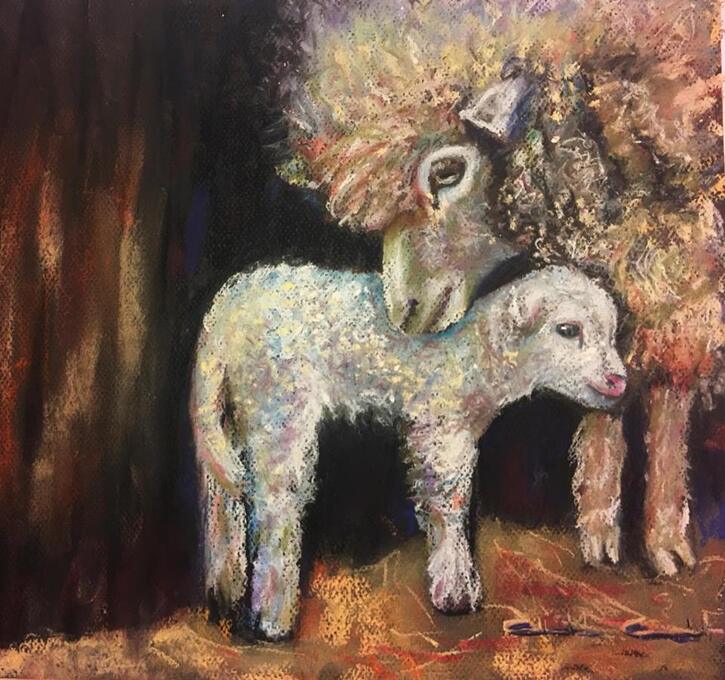 I decided to paint this, because it was on my heart.
So many people paint lions, everyone wants to be a lion.  Lions get to roar, they carry the government of God, they're strong and courageous, but even though we are called to all be lions, we are also called to be lambs.  Jesus says in the Word, take up your cross and follow me.  It is easy to follow as a Lion, but harder to follow as a lamb being led to slaughter.

I found this image, it was over a mother, with her baby, in a slaughter house.  And there was something so beautiful about it.  There was a dignity in her face, but also a desire to keep her baby safe.  In the kingdom, everyone wants to preach and be bold, and there is nothing wrong with that...but, where are those who will lay down their lives for others.  Those who will cover others, instead of exposing them.  Where are those who will weep and fast and pray over their brothers and sisters, or the lost?  Where are those who will willingly lay themselves on the altar to be crucified for the name of Christ?

Its great to have lions.  God bless the Lions, but the church needs more lambs.

In the Kingdom of God, it is often opposite than it is in the world.  Lambs seem to be weak and powerless.  But because Jesus chose to be the lamb, came here, laid down his life, and died on a cross...He made a way for all of us.

It is the ultimate power to be a lamb.

Love is more powerful than anything.  And the bible says there is no love greater, than when a man decides to lay down his life for another.  When we choose to willingly lay down our lives.  When we choose love, We gain authority over death, over hatred, over all the schemes of the enemy.
When we fight evil with good.  We have the ultimate victory.

Submission to God is power.  And weakness is strength in God's Kingdom.  We need more lambs, willing to lay down their lives for others, so that they might live.