Sitting on the Lap of Love 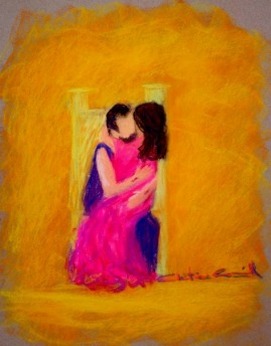 Near the end of the year, I kept seeing the Bride sitting in Jesus' lap. Her arms were wrapped so tightly around His neck. I was perplexed. Wondering what that might mean. So a couple of days later, I asked the Lord and this is what I felt like He said to me:

“This time of year, all the children line up to sit on Santa’s lap, and tell him what they want for Christmas, but I how long to have my Bride come to me and sit on my lap. I want to hear her whisper in my ear what she wants…to share her hearts desire, to see her be a child on her Father’s lap, trusting Me to provide all her needs according to My riches in Heaven. I am Jealous for Her.”

Tonight is Christmas Eve, and I remembered what He showed me, so I was ready to paint it. As I was waiting, I saw a big throne that He was sitting on.  I started painting it, and that worship song, “I see the Lord, seated on the throne…” came on my iTunes, "randomly".  Then, as I heard the words, "and the train of His robe filled the temple with Glory," I saw the Glory all around them, and it came into the room where I was...and so I put it in the background of the painting.

Interestingly I got several "gold" gifts this year for Christmas.  A gold chain, a golden butterfly and gold anointing oil were some of them.

I think, the reason He gave me this painting is because, so many in the Body have been struggling financially, and I believe God just wants to encourage us that He is the King of Kings, He sees and knows...and loves us.  I pray you will become like a child again, crawl up on His lap...and whisper in His ear...because He does care, and He REALLY wants to bless you! Merry Christmas!

Hebrews 10:32
Remember those early days after you first saw the light? Those were the hard times! Kicked around in public, targets of every kind of abuse—some days it was you, other days your friends. If some friends went to prison, you stuck by them. If some enemies broke in and seized your goods, you let them go with a smile, knowing they couldn't touch your real treasure. Nothing they did bothered you, nothing set you back. So don't throw it all away now. You were sure of yourselves then. It's still a sure thing! But you need to stick it out, staying with God's plan so you'll be there for the promised completion. It won't be long now, he's on the way; he'll show up most any minute. But anyone who is right with me thrives on loyal trust; if he cuts and runs, I won't be very happy. But we're not quitters who lose out. Oh, no! We'll stay with it and survive, trusting all the way.