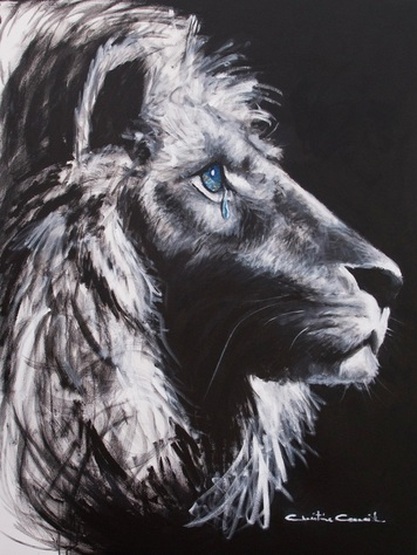 This was painted during a worship service, but it was from an experience I had in my quiet time months earlier.  The Lord led me to release it at a MOW conference in Raleigh NC at The Worship Center.  The first song the worship team sang invited the Lion of Judah to come.  It was a confirmation from the Father that it was His will to paint the vision.

In the vision I was on the Lion’s back holding onto His mane and He was wearing a crown.  We seemed to be in outer space because it was dark and there were stars all around. At one point, He banked to the right and then looked down below us.  Out of curiosity I looked over my right shoulder to see what had captured His attention, that is when I saw the earth.  It was so beautiful against the black sky, its colors were glowing in the darkness. It looked alive.

I turned back to see His reaction and when I did, I saw His face was being lit up from the illumination below.   When I looked into His eyes, I saw the earth being reflected there.  The longing I saw in His eyes reminded me of how a Groom looks when he sees his Bride coming towards him in a wedding.  He began to share with me, without talking, how He longed to be with Her, she was His Creation, His Masterpiece, and the Love of His Life. His Bride.  I could feel His longing and sadness.  Then I saw a tear coming from His eye. For weeks after I saw this, when I would try to share it, the feelings and deep love He has for us would come back and overwhelm me bringing me to tears.  I pray you will feel and know His Love for you too. 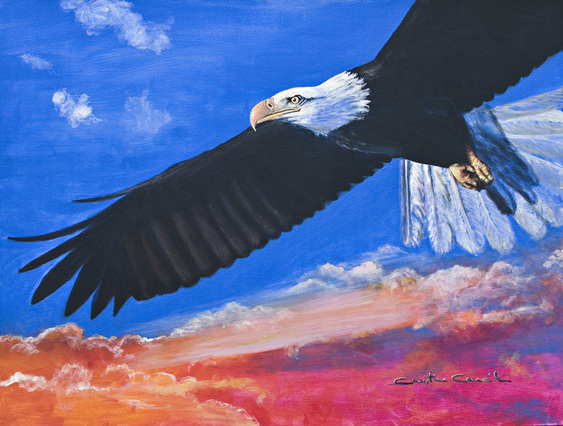 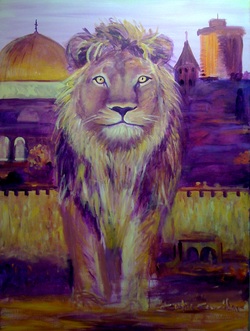 Recently, I went to my home church to paint, but I couldn’t, I mean, I could not see to paint.  I prayed before I went, and when I got there, and I waited before the Lord, but nothing came to me.  This was VERY unusual for me because I can usually always see something to paint.  So why did this happen?

Earlier, I was confronted by my pastor with accusations from several other artists, accusing me of plagiarism because I am using reference photos.   It took me back because I don’t want to do anything wrong, that is not my heart, plus they did not come to me in person.  After he spoke with me and other artists came to my defense, he reassured me that I was fine and their accusations were most likely rooted in jealousy or insecurity.  I had the thought, maybe even judgment and disobedience too.  We can also see in the bible, that a spirit of religion and jealousy is critical, and will always look for something wrong you are doing, because everything they do is based on works/performance.

So after that happened, I had a very hard time painting at what I consider to be my home church…where the accusations had originated, while beforehand, it was my favorite place to paint because I felt most safe there.

I was standing in church, asking God to help me see, when a sweet sister, who totally gets me, and is a lioness in the spirit, came up to me.  She came like a lion too.  As soon as I saw her, I started weeping because she made me feel safe.  She reached out her hands, and prayed for me, I ended up on the floor sobbing.   And, as I lay there, I finally saw!!!!

I saw the Lion of Judah and He was not happy.  He was ready to war and I felt like He was coming to my rescue.  I watched as He marched towards me, asking Him, “What are you showing me Lord?”  Then He turned ever so slightly to his right and over His shoulder was the city of Jerusalem.  That was the end of the vision and I had no idea what or why He showed me this…I only knew it meant something.

In the couple of weeks after first seeing this vision, He has made it clear.  He was showing me Jerusalem is His Favorite, He is jealous for her and He will defend her, but because she is His favorite, she will also be hated.

They did the same thing to Him, Joseph, David, Able, and that sweet giving woman lying at His feet, pouring out the greatest treasure she possessed.  The sad thing is, everyone has the capacity to be one of His favorites, even Saul, Cain, Joseph’s brothers, the others at the dinner, they all did…and He gave them opportunity to as well.  You know, even the countries and people that try to hurt Israel, they do too.

So this painting (when it is finished) will be the truest reproduction of the vision He gave me when I was laying there, weeping on the floor.

I felt led to release it at the Worship Center in Durham while a precious woman ministered in music; she told me later, she and her husband, who used to lead a messianic church in the area, are both citizens of Israel.  She also told me about a dream she had where she encountered the Lion of Judah face to face!  That was God.

Another thing that was totally God, was one of the most amazing artists I know, Dan Nelson, set up beside me, he wasn’t painting this time, he was playing as part of the worship team.  I had no idea he would be there, and I truly consider it an honor to know him and call him my friend.  I have seen him go through the fire for years, and give and give and give with a pure heart and gentle humble spirit.  As I was painting, and using my reference photos, I realized he could see me, so I shamefully confessed to him, “I use reference photos”, but he just looked at me and said, “Of course!”  Like, “duh, everyone does that”…more confirmation from a voice I trust, that God was ok with me.

~Prayer for this Painting~ 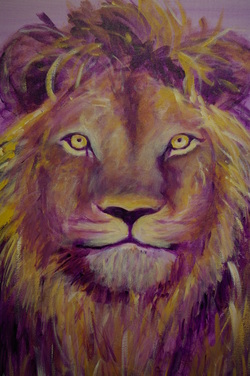 I paint this painting in honor and as a form of intercession for all those out there that know they are one of God’s favorites and have felt the sting of jealousy's bite.  As intercession for Jerusalem and its people!  As a tribute to those that loved God in that Bible and were after HIS OWN HEART!  And I also paint it for all those that have yet to step into what God has for them because of lies, insecurity, judgment’s trap or jealousy!!! Remember, if you do well…will not your countenance be lifted up?

THERE IS A Roaring LION that is JEALOUS for YOU...just like that horse cried out for his favorite!!!  HE will come and make WAR for YOU!!!  The Battle Belongs to HIM, because HE IS the LION OF JUDAH and HE LOVES YOU, and HE will DEFEND YOU!!!!!!!

“When his brothers saw that their father loved him more than any of them, they hated him and could not speak a kind word to him.”

“And the LORD had regard for Abel and for his offering; but for Cain and for his offering He had no regard.  So Cain became very angry and his countenance fell.  Then the LORD said to Cain, “Why are you angry? And why has your countenance fallen? “If you do well, will not your countenance be lifted up? And if you do not do well, sin is crouching at the door; and its desire is for you, but you must master it.” Cain told Abel his brother. And it came about when they were in the field, that Cain rose up against Abel his brother and killed him.”

For rebellion is like the sin of divination, and arrogance like the evil of idolatry.  Because you have rejected the word of the LORD,

"They are going to do all these things to you because of the way they treated me, because they don't know the One who sent me. If I hadn't come and told them all this in plain language, it wouldn't be so bad. As it is, they have no excuse. Hate me, hate my Father—it's all the same. If I hadn't done what I have done among them, works no one has ever done, they wouldn't be to blame. But they saw the God-signs and hated anyway, both me and my Father. Interesting—they have verified the truth of their own Scriptures where it is written, 'They hated me for no good reason.'
All content is copyrighted and may not be used without written permission from the artist.