The Voice of the Turtle

I am coming out of a hard winter season and at times, it was so harsh, all I could do was be very still and pray for spring to come. God seemed so far away. While I was in this cold dark place, I kept thinking about the scripture: “My dove in the clefts of the rock, in the hiding places on the mountainside”…just wanting to paint it, feeling like that was where I was…where I wanted to be.

I finally got to a place where I felt the purpose for my winter was about to be revealed. I called a sister and she prayed with me, as soon as she did, I was set free from something that had been tormenting me since I was a little girl. I believe, sometimes, God will turn up the heat in our lives to bring things to the surface, just like gold being refined, there is a process for cleansing. Sometimes there is nothing we can do, when we are in the fire, but just wait for His work to be done in our souls. I knew that on the other side of this dark winter, was spring…as well as a promotion. Testing always brings promotion.

Not long after that, a sister called and invited me to go to a conference at the beach, she said the Lord had prompted her to ask me to go with her in the middle of the night. I was excited but asked God if He wanted me to go, to have someone give me money for gas, a specific amount. Later that day I had to go to the dentist, and it was a new dentist, right by my sister’s home. I decided to surprise her. So with my face half numb, we laughed, and had dinner. It was good to fellowship with her and her family…to laugh again and be around people. She knew about the winter I had been in, and she was concerned about me. My sister, more than anyone has seen me go through the fire over and over. So I was grateful to be able to show her I was getting better. As I was leaving, she followed me out and then out of the blue said, I have a gas card, would you want it? She then told me the amount, it was the same amount I had asked God to give me. I knew I was to go on this trip.

Flowers appear on the Earth

Before I left, I felt led to prophesy to a new friend and I saw flowers appearing all around them as they were stepping out of the wilderness and walking into a new season…springtime had come. It was so beautiful to see…and I remembered there was a scripture about flowers appearing on the land in Song of Songs. I had also confided in this same person about the horrible winter I had been going through…asking them to pray for me. I knew they were safe to share with, because I could see they understood how harsh a winter can be.

The same day I prophesied to my friend, I chose to do a Bible cryptogram about birds. I love doing cryptograms, it is something I do to relax. I chose one about birds because I had been enjoying watching the birds at my feeder this winter. So many doves and bluebirds that were a new edition this year. They just look like spring to me, like hope manifested, and so full of that beautiful heavenly revelation blue. Well, when I finished the puzzle, it turned out to be the very same scripture I had heard for my friend: “The flowers appear on the earth; the time of the singing of birds is come, and the voice of the turtle is heard in our land;”. I thought…wow…that is really cool…but how strange, I did not know that turtles had a voice. I wondered what they would sound like? haha

The Singing of Birds is Come 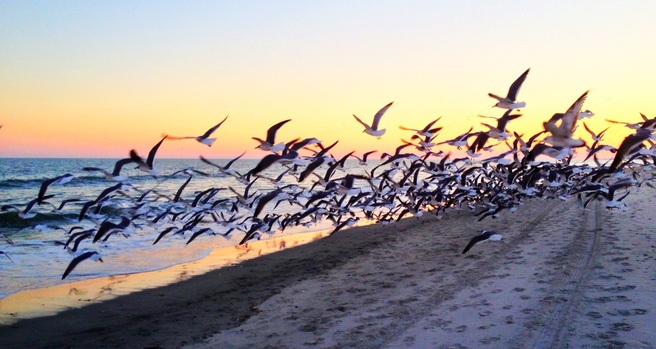 That weekend, I went to the conference at the beach and the first night, they had us sing in the Spirit. For the first time in a long time, I sang. I finally felt like singing…and it felt good. The next day on the way to the meeting, I got a NEW song. When you have been in winter, you think you will never sing again. So I knew my spring had finally come again.
After the meeting that day, I went to the beach with my friend, and there were seagulls everywhere. We had never seen so many in one place. They had probably flown south to avoid the harsh winter storms in the north where they had gotten several feet of snow. It was so beautiful and almost supernatural to see. I felt God was speaking to me, encouraging me that not only will I sing, but I will fly again.

When I got home from my trip, I had been thinking about the turtle’s voice the whole weekend, so I went to see if I could learn more, and when I did, I discovered, it was a turtle DOVE!!!

The cryptograms I do are in King James, so that was why it said just turtle…and I rarely read JKV…so it did not dawn on me until I saw it in another version. Then I just laughed! As I looked I realized the scripture about the dove in the cleft of the rock was part of the same chapter.

Later that day, I prayed for a friend and I got a song in the spirit…it was so sweet to hear the Lord sing and be able to sing it over them. I felt His presence so strong. Then I saw that my friend that I prophesied to originally post a note on FB about how the birds always sing after the storm. It just blessed me. They did not know I had been singing that weekend.

Emblem of Love, and so of the Holy Ghost 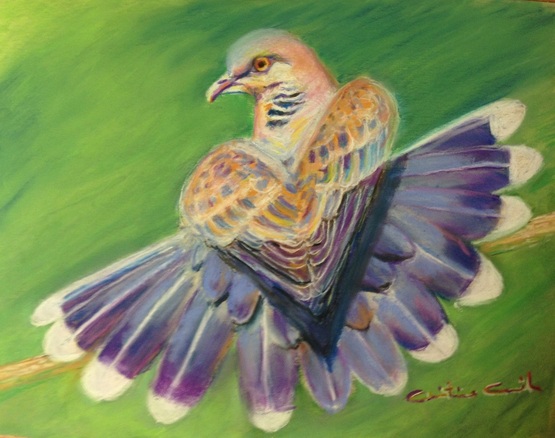 So yesterday, I had the thought to go and see what the turtle dove looked like, and to learn more about it.

Turns out it hides in winter, so it’s song is not heard then. When the song is heard again, in the beginning of May, it is a sign that spring has come. That LOVE is in the air.

When I saw what they looked like, I was surprised to see that their wings form a heart, an emblem of LOVE. I felt led to paint it, to remember how spring came to me…especially right here at Valentine’s.

The wings are what the bird flies with, what takes her high above the earth, giving her revelation from God’s perspective. The wings on this bird make a heart, because it is her desire to fly with Him. The heart is flesh colored, represents pentitant, contrite, heart…it is a heart that is tender, gentle and soft.

I will give you a new heart and put a new spirit in you; I will remove from you your heart of stone and give you a heart of flesh.

When you are in a winter season, you sometimes can’t feel anything, you feel as though your heart has become like stone.

The tail is blues and purples, those are the colors of heavenly revelation knowledge, grace and royalty. It represents intercession, dominion and abiding in Him. The tips are white, for purity, righteousness, surrender and a pure hearted bride. There is also a tint of pink which is the passion that the dove feels for her King.

The eye is orange and yellow. The fire and glory is in the doves eye. The fire of winter has given her eyes to see and carry his glory! 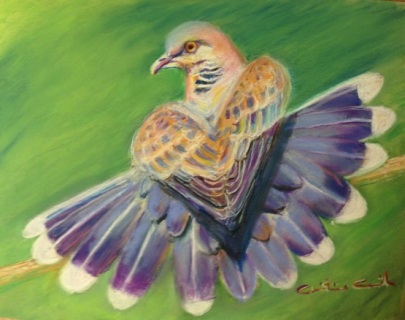 $30.00
Add to Cart
50 4" x 6" Cardstock Postcards with description of painting on back, or custom printing available upon request.

$25.00
Add to Cart
Metal Key Chain
All content is copyrighted and may not be used without written permission from the artist.