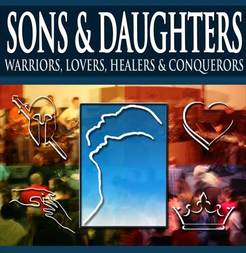 entering destiny      the shift to love
If we know him ... this is our destiny and our joy! These three days are an equipping journey into the greatest of all privileges.
We are not orphans, we are not fatherless, we are those who have been brought into the great love of Papa God and so we carry the mystical, holy, powerful, joyful, loving inheritance of the father through His Son Jesus!
We are the passionate ones, the deliberate lovers, the extension of his hands and feet, the ones who stand in victory and seize the day through our rest in him.
Chosen!  We are warriors, lovers, healers and conquerors!
We are sons and daughters of the Most High! We carry His Heart... His Dream... His Love to an orphaned generation. We are those who will give destiny to the destitute, hope to the helpless and joy to the jaded.
We are those who move by His Authority and release His Purpose throughout the earth. We are the seed on the earth that Heaven has released for such a time as this!
Come be a part of this gathering of believers from many different streams that will all flow into One River! Come be a part of His Family and be changed, healed, and empowered for the days to come! 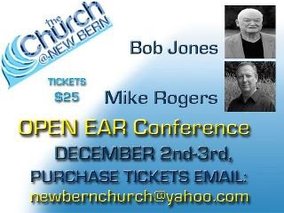 Bob and Bonnie Jones will be ministering and imparting the "Open Ear". This will be an intimate atmosphere.

When only seven years old and walking on a dirt road in Arkansas; the Arch Angel Gabriel appeared to Bob Jones on a white horse and blew a double silver trumpet in his face.  He then threw an old bull skin mantle at Bob’s feet.   Although fearful at the time he ran, however, many years later he returned to pick up that old mantle which is that of a Seer Prophet.  Bob Jones is known as a contemporary prophet with a great love for the Lord Jesus and His truth.  His prophesies have spanned over four decades as the Lord has enabled him to foretell earthquakes, tidal waves, comets, and weather patterns.  Like Daniel who functioned at an incredible level, Bob has often told leaders their dreams and experiences, as well as the interpretation.

After his death experience in 1975 God sent him back to minister to church leadership and reach the multitudes with His love, truth and equipping the saints with understanding of the spiritual gifts.  God promised Bob that he would see the beginning of one billion souls coming into the kingdom in one great wave of the end time harvest.

Bob moves with a clear revelatory gifting, accompanied by gifts of healing and miracles.
PropheticSong

I love music and have been singing since was very little.   I remember, as a very young girl, talking to God and saying, "I feel like I should be able to open my mouth and sing a song I never learned before.”   Well, I didn’t know what I was saying, but now I do.

After being filled with the Holy Spirit, songs began to come to by the Spirit.  I would sing all the time, in the car, at home...anywhere.  I started hearing songs during worship, and wanted to sing them.Sometimes they would come strong like I HAD to sing them, and other times they would be birthed out of a quite time and place.

It was in the quiet place that I started to hear the Lord sing over me.   I also started hearing songs when I would pray for people, just like I heard them when He sang to me in the secret place.  As my faith got stronger, I started singing them for people, and it ministered to them and the Holy Spirit would come over me and them in a tangible way.

Someone prophesied to me recently that my fingers were piano keys and to finish writing the songs God has given me...I hope to record and share them here soon.
“Prophetic art is deep calling to deep, with a simple voice.”

It is the revealed WORD of the LORD.

All the arts can be used to reveal Jesus...painting, dancing, sculpting, drawing, photography, digital art, music, and writing.

Prophetic art isn't about how perfectly the created piece is executed, but it is more about how much of Him is in it.

Distinguishable because of the level of anointing that rests on it.

Prophetic because of the amount of revelation it brings.

Prophetic art and artists are birthed out of intimacy with Him, knowledge of His Word and time spent worshiping Him in the Spirit.

It gives others eyes to see.